A Little History About A Little Cottage 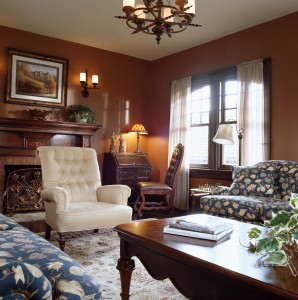 Guests who visit Biltmore often ask us about the beautiful little cottage that sits close to the estate’s exit road, near our Inn.

Designed by Richard Howland Hunt, son of Biltmore House architect Richard Morris Hunt, the cottage  – known as the Market Gardener’s Cottage – dates back to 1896 and anchored the Market Garden, also known as the Truck Farm. This garden was considered the most important vegetable growing site on the property, where many seasons of vegetables and fruits were harvested to serve the estate. The staff always employed the latest scientific farming techniques and machinery, not surprisingly since George Vanderbilt often was thought of as an innovator.

It may be hard to imagine now, but the estate’s first vegetables were intended to grow in the Walled Garden near Biltmore House. Yet, Mr. Vanderbilt wanted these gardens closest to Biltmore House to thrive with ornamental plants and flowers. The vegetable and fruit operation was relocated to the site of the cottage, on bottomland along the Swannanoa River near its juncture with the French Broad.

George Stevenson Arthur (1861-1945), a native of Scotland, came to Biltmore in 1897 to manage the estate’s gardens and greenhouse. For the next 17 years, he and his wife, Isabella, lived and raised nine children in the cottage. Following George Vanderbilt’s death in 1914, the family moved into Biltmore Village.

Archival documents tell us that Biltmore sold excess vegetables and fruit to the public at wholesale rates. An Asheville Daily Citizen article alerted its readers “and housekeepers [to] have their attention attracted to the new advertisement of the Biltmore Farms …” An article later that year predicted that, because “Mr. Vanderbilt … has both brains and science at his command,” the Biltmore Market Garden could easily compete with the long-established farms of the northeastern U.S.

Archives also show that in 1897, estate superintendent Charles McNamee placed an ad in the Asheville Daily Citizen for cabbage and three kinds of sweet potatoes for sale from the garden. The courtyard by the cottage also served as a vegetable packinghouse and wholesale outlet for local merchants who could access the estate from Victoria Bridge on the Swannanoa River.

In the early 1980s, the cottage was renovated to provide accommodations for VIPs and individuals from out of town who had business with the estate. The courtyard was used as an outdoor set during the 1992 production of Last of the Mohicans, filmed on the grounds of Biltmore and at other locations in western North Carolina.

Biltmore carries on the Market Garden tradition by maintaining a Field-To-Table production garden that supplies fruits, vegetables and herbs to estate restaurants. Like the Vanderbilts and their guests a century ago, contemporary estate guests can dine on products grown right here at Biltmore.

Today, the cottage is available as a part of the Inn’s accommodations. It includes meals prepared by an estate Chef, who incorporates estate-raised ingredients. It’s a nice tie-in with our history, and another example of how we strive to carry on Mr. Vanderbilt’s original intentions.

About the photos:  The main photo features a side view of the Market Gardener’s Cottage. The secondary photo is the cottage’s Living Room.

BRING THE KIDS FOR FREE

Christmas at Biltmore & Candlelight Christmas Evenings are FREE for kids 9 and younger.

Designing Christmas One Room at a Time

Please enjoy this archived content from our2018 Christmas at Biltmore celebration. To...

For the past decade, Tracy Ross has enjoyed Christmas at Biltmore from...

This week’s arrival of William and Kate’s baby – His Royal Highness...