A Room by Any Other Name: Uncovering the History of the Library Den - Biltmore

A Room by Any Other Name: Uncovering the History of the Library Den

Lauren Henry joined Biltmore as the Archives and Curatorial Assistant in October 2016, and by September of the next year, she was promoted to Associate Curator. 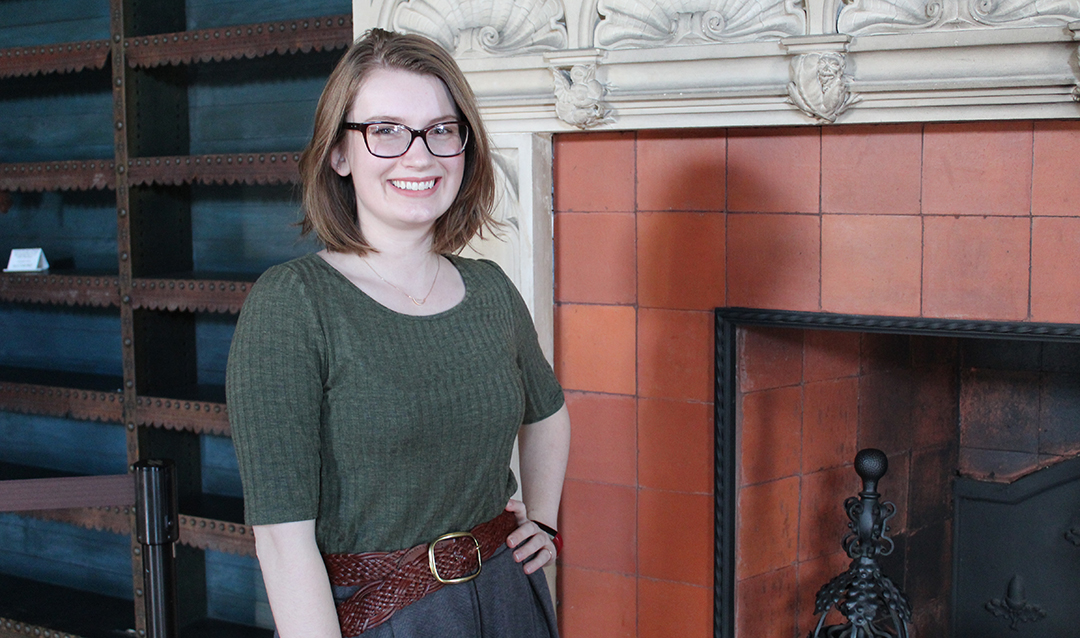 During that time, Lauren was tasked with researching one of the most intriguing, yet enigmatic rooms in Biltmore House, which also happens to be one of the smallest—a room known today as the Library Den.

Currently, the Library Den is only open to guests as part of our Premium Guided House Tour, so the relief carving of St. Peter the Martyr on the door leading to this space from the Library is the only part of this room that many guests get to see.

“The room itself has always been a bit of mystery for the Museum Services team as well,” said Lauren. “It was very exciting to piece together all of the fragmented information that we have in the archives so we can begin to see the bigger picture for the first time.”

What’s in a Name?

In one of the earliest descriptions of the room, George Vanderbilt’s niece Frederica Webb, who visited Biltmore in 1899, wrote to her brother:

The Library here is too beautiful. You have never seen such books. Off the room is a little room in which are reference books & writing tables & it is there you can go when you want to write or read quietly for no one is allowed to talk in there.

While all original floorplans of Biltmore House refer to this “little room” as the Den, manuscript and oral history mentions have referred to this room as the Little Library, the Gold Room, and the Print Room, among others.

Because of its many names, the history of the Library Den is less certain than it is for other rooms in Biltmore House—most of which have assigned, well-documented names. 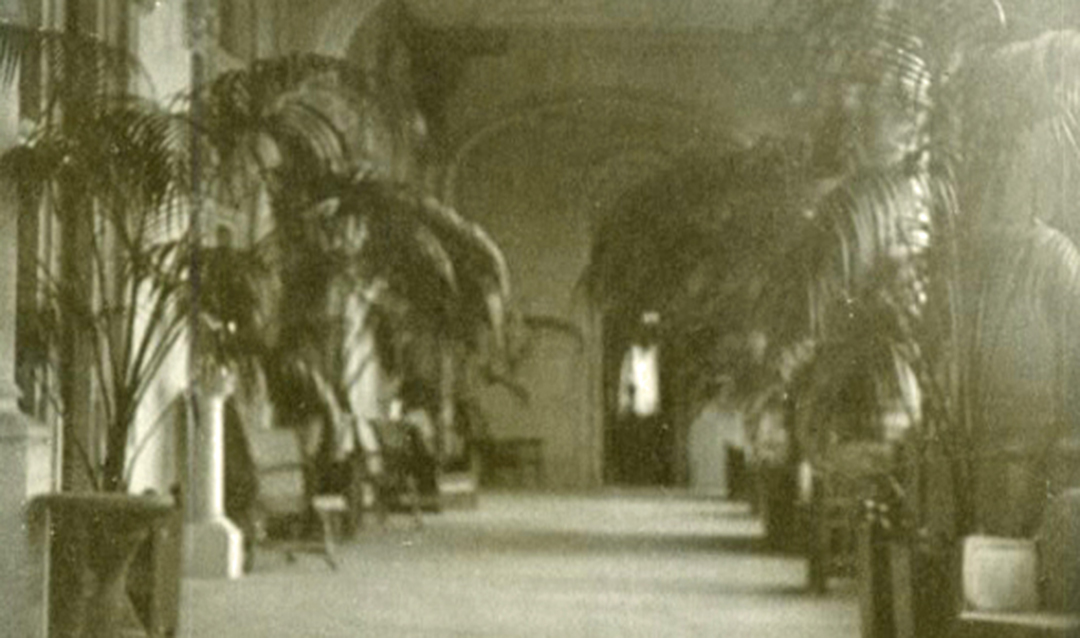 The only archival image of the Library Den in the Biltmore House collection, taken from the far side of the Loggia, circa 1900

William B. Osgood Field, a good friend of George Vanderbilt who visited Biltmore many times, mentioned in several letters during an 1896 visit that he would retreat to this room to read or to write letters to his family, one of which included the following:

I have just come in from the end of the Terrace, where I saw the sunset over Piska [sic], and now I am seated in the Dura [sic] room looking over this letter to the mountains in the distance, the French Broad in the Valley and some sheep that are just coming up the slope to shelter for the night.

Beyond simply being an extension of the Library, Willie’s letters allude to this room’s other notable purpose: to display George Vanderbilt’s prized collection of Albrecht Dürer etchings and woodcuts.

“And Willie was not the only Biltmore House guest to refer to this space by that name,” said Lauren. 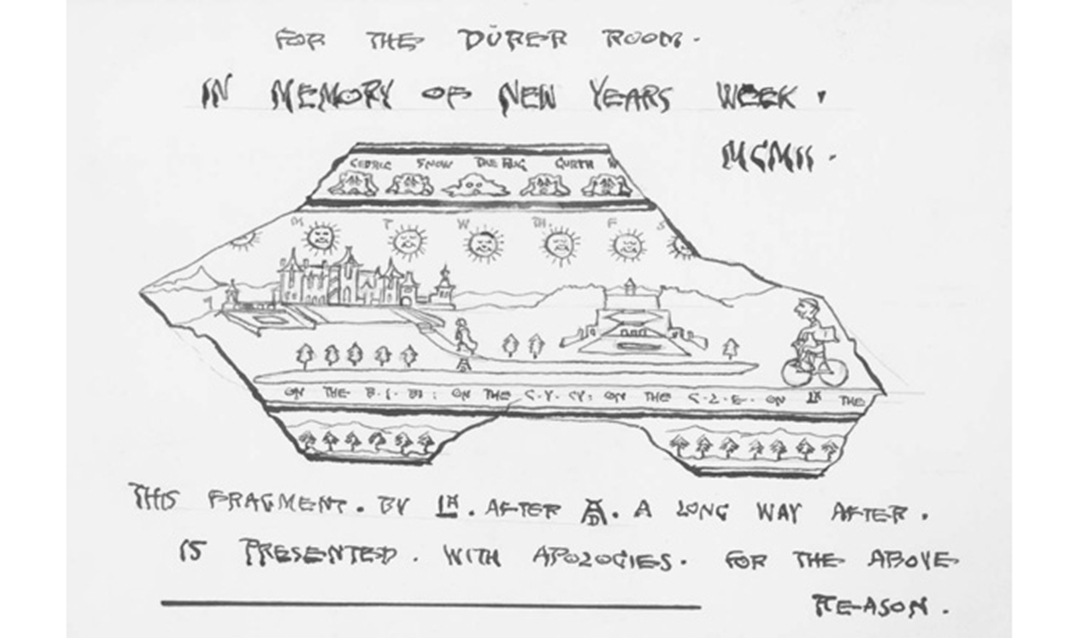 For the Durer Room, Larz Anderson

Other references to the Dürer Room:

“We have pretty clear archival evidence that George’s Dürer collection was showcased in this room,” said Lauren. “But we also have another clue that was hidden in plain sight.” 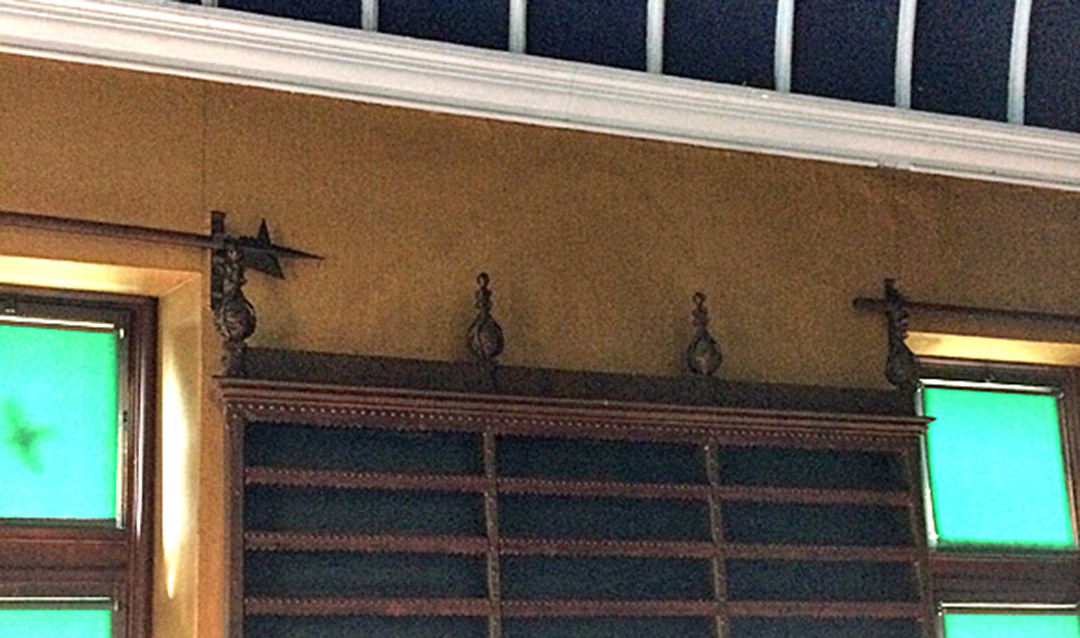 Shadow from “Triumphal Arch of Maximilian”

The west wall of the room still bears a shadow, now partially covered by a bookcase, where Dürer’s “Triumphal Arch of Maximilian” hung prior to its relocation to the Salon sometime before 1930. (In 1975-1976, it was moved to the newly opened Music Room.)Pictured: “Triumphal Arch of Maximilian” shadow above the bookcase on the west wall of the Library Den.

As much of George’s Dürer collection was sold in 1906, it would make sense that the name and purpose of the room would begin to shift in that years that followed.

“This archival document suggests that by this time, the room was no longer referred to as the Dürer Room, but rather the Den,” said Lauren. “But I also think that it suggests that in addition to their guests, the Vanderbilts themselves spent a great deal of time in this special space. It’s remarkable to think that one of the smallest rooms in America’s Largest Home® was also likely one of the most beloved.”

From stunning works of glass art in Biltmore's collection to the glassware...

Today, January 17, is the 140th anniversary of Edith Vanderbilt’s birthday. In...