Orchids take the stage at Biltmore later this month 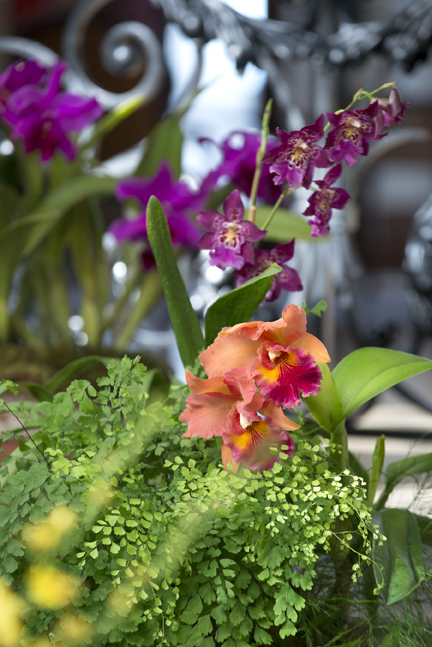 At the end of the 19th century when George W. Vanderbilt was creating Biltmore, conservatories andplant collections were at their peak of popularity in both botanical gardens and among wealthy estate owners in Europe and the United States. Originating in the 16th century, the earliest conservatories were specially designed for growing citrus and other fruits in colder climates and were sometimes known as “orangeries.” In time however, conservatories were designed to house collections of palms and a wide range of tropical plants, including the most desired of all – orchids. With some 25,000 species and 100,000 cultivated varieties, orchids comprise one of the two largest families of flowering plants, and have a colorful and intriguing history.

We’ve been thinking a lot about orchids lately. The reason? Starting March 21, Biltmore will feature a lavish display of more than 350 exotic orchids and lush tropical plants in the Winter Garden inside Biltmore House. For the first time, we will allow our guests to walk into the glass-domed room so they can see the specimens up close from March 21-April 7. This is all part of our spring celebration when Biltmore Blooms

When discovered in the early 1800s, these mysterious tropical orchids were an immediate hit, particularly in Britain. Once it became known that these beautiful plants existed in far-off lands, Victorians wanted them as status symbols. The demand for orchids grew practically overnight, forcing nurseries and private collectors to hire plant explorers to go to exotic places such as South and Central America in the New World and India and Nepal in the Himalayas to search for the finest orchids. Historical records document that vast numbers of plants were collected from the wild and shipped back to Europe in Wardian cases, or miniature greenhouses, to meet the ever-increasing demand. The fact that many, up to a half, of the plants didn’t survive the voyages made them all the more rare, desirable and expensive.

Many people became so obsessed with acquiring orchids for their collections that the fad became known as orchid mania or “orchidelirium,” a frenzied desire to collect rare orchids at any cost.

According to the Royal Botanic Gardens at Kew, orchids were the “‘must have’ accessory in the 1800s,” and the first plants brought back to England fetched exorbitant prices. The highest amount known to have been paid for one orchid was $2,231 in 1890! Or, roughly, $143,525 in today’s dollars.

Orchid hunters often had a formidable task ahead of them – enduring dangerous voyages, cannibalistic natives, wild animals and poisonous snakes, thieves and a variety of diseases. They were often heavily armed not only for protection against wild animals, but also other orchid explorers as rivalry was intense.

By the time George Vanderbilt was planning his conservatory at Biltmore, orchids were still quite fashionable, therefore an entire wing was designated the “Orchid House” for growing orchids. The need to send collectors on dangerous journeys for orchids had ceased because the plants were more readily available for reasonable prices from nurseries, as hybridization since the 1850s had produced many new varieties.  Frederick Law Olmsted specified that 800 orchids, comprising more than 30 varieties, be purchased for furnishing the conservatory’s orchid house.

Glass-roofed garden rooms like the Winter Garden in Biltmore House were considered quite stylish in the Victorian era, providing a place to relax or entertain amid an indoor jungle of exotic plants. Archival photos show some of the Vanderbilt’s friends and family enjoying the space for diverse events such as costume parties and John and Cornelia Cecil’s wedding breakfast. The bride carried a beautiful bouquet of lilies-of-the-valley and, naturally, orchids.

About the Main Photo

Simone Bush, a member of Biltmore’s Floral Team, takes care of an orchid plant in the Winter Garden inside Biltmore House. During the first two weeks of our celebration of spring blooms at Biltmore (March 21 through May 31), guests will be able to walk into the Winter Garden for the first time to enjoy a lavish display of 300-plus orchids.