In the winter months, The Conservatory offers a welcome and toasty respite for folks roaming the 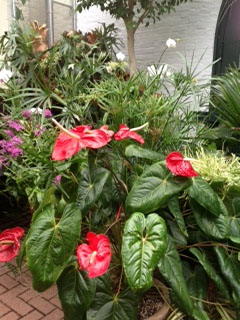 grounds around Biltmore House and the Walled Garden. Maybe it’s going out on a limb to say it’s one of the warmest spots in all of western North Carolina, but certainly it comes pretty close.

The Conservatory’s soaring greenhouse design by Biltmore House architect Richard Morris Hunt, has a way of sneaking up on guests despite its 40-foot height and 7,500 square feet. That’s because it’s located down a steep hill from Biltmore House.

Its position on the lower part of the property protects the building from the harsh winds that roll across the south lawn (terrace) of Biltmore House. Plus, as per the architect’s plans, it doesn’t distract from the view of the front of Biltmore House.  Our visitors today often don’t realize the building’s majestic beauty until they’re practically right up on top of it!

In the winter months, its internal temperatures mimic those of a jungle, with thousands of tropical plants experiencing their peak blooming time. Towering palms and colorful Begonia, Bird of Paradise, Lollipop Plant and Anthurium dazzle on a dreary cold day.

And between now and the end of March, The Orchid Room, located in the southern wing of the building, turns into an absolute showplace with a huge variety of stunning orchids, nurtured and maintained by the Conservatory’s crew members.

Stop in for a warm-up!