At Biltmore Estate in Asheville, NC, some of the most notable art history in our collection appears as tales within tapestries. 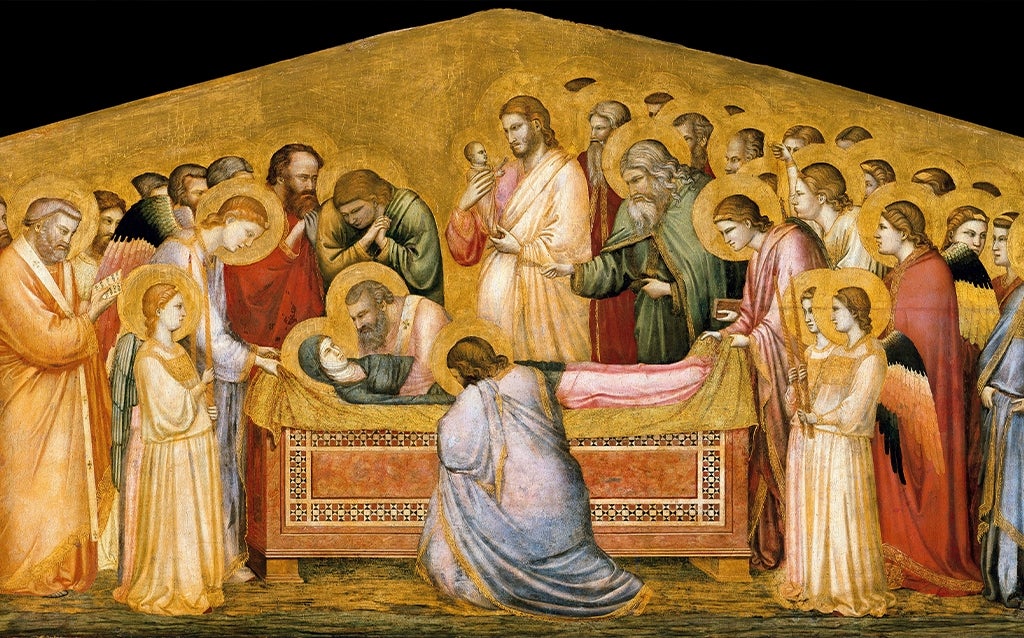 “The Entombment of Mary” by Giotto from the Gemäldegalerie in Berlin comes to life as part of Grande Experience’s Italian Renaissance Alive, making its world premiere at Biltmore’s Amherst at Deerpark®.

On March 3, 2023, Grande Experiences will launch Italian Renaissance Alive at Biltmore. This all-new multi-sensory experience takes you on a spellbinding journey across Italy, illuminating the masterworks of such icons as Michelangelo, Raphael, Botticelli, and Caravaggio.

In honor of the world premiere of Italian Renaissance Alive, let’s explore some of the tapestries that were created during the Renaissance—a time when patrons often commissioned artists to create masterpieces based on religious, mythological, and historical symbols and allegory.

At 90 feet in length, the Tapestry Gallery is the longest room in Biltmore House. Painted limestone overmantels above each fireplace visually divide the room into thirds, with each third devoted to one of the three tapestries George Vanderbilt acquired from an original set of seven known as “The Triumph of the Seven Virtues.”

The Tapestry Gallery is the longest room in Biltmore House, and was designed to showcase part of a set of tapestries known as The Triumph of the Seven Virtues.

Woven from wool and silk in Flanders (now part of Belgium) between 1525–1535, these tapestries were intended to illustrate how the seven virtues−faith, prudence, charity, chastity, temperance, fortitude, and justice−would always prevail over vice.

“No one knows exactly who originally commissioned the tapestries or where they hung, but it’s speculated that they would have been displayed in the manor house of a wealthy and aristocratic family,” said Lauren Henry, Curator.

The “Triumph of Charity” shown here is one of the three tapestries from the “Triumph of Seven Virtues” series that George Vanderbilt purchased for Biltmore House. Other examples of the remaining tapestries are housed in just 10 collections across the world, including the Cluny Museum in Paris, the Walker Art Gallery in Liverpool, England, and The Fine Arts Museums of San Francisco.

While multiple sets of these tapestries were created, very few of them survived through the centuries, and there are no examples of the Triumph of Temperance still in existence.

Detail from the “Virtue of Prudence” tapestry showing King David and Abigail from 1 Samuel 25.

Each virtue is illustrated through biblical stories and symbols that would have been familiar to people in 16th-century Europe. To more modern eyes, however, the meaning of the figures in the tapestries can be a bit mysterious.

Detail of one of three fearsome serpent heads featured in the “Triumph of Prudence” tapestry.

The central figure in the “Triumph of Faith” represents The Church as a body. In the upper left corner, there is a depiction of the story of Jacob’s ladder with an angel climbing into heaven. The chariot of fire next to it represents the prophet Elijah, while the blindfolded woman on the pedestal next to that symbolizes the old law.

“The tapestry in the center of the Tapestry Gallery is the Triumph of Faith, which is believed to be the only one still in existence,” said Lauren.

At the top of the tapestry, the Latin inscription is “Holy Faith believes by the Divine Word and worships God through every dutiful practice.”

Detail of the “Triumph of Faith” showing the figure of the winged man riding a lion.

The virtue of Faith is depicted as a woman holding a church, chalice and cross. Below her, the figure of a winged man represents the human aspect of Christ, riding on a lion, representing both the apostle Mark and the Resurrection.

The ox represents the sacramental nature of Christ. The Eagle represents the apostle John. All four of these symbols were said to have been seen as guardians of the throne of God by the prophet Ezekiel. 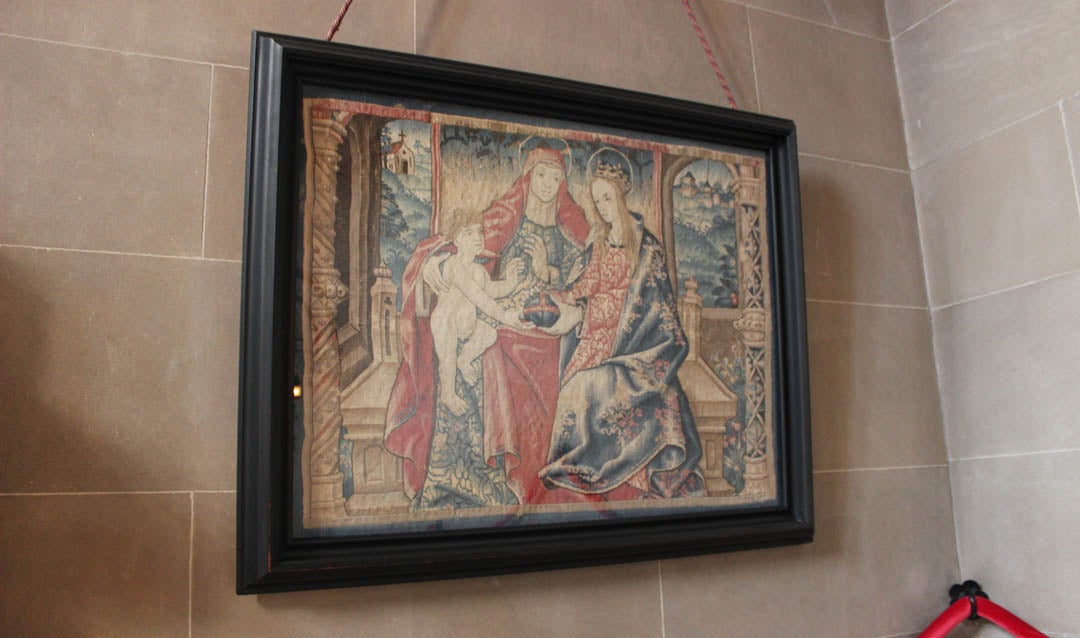 Woven in rich reds, blues, and golds, this 15th-16th century tapestry depicts the Christ child with the Madonna and Saint Anne.

Another beautiful tapestry in Biltmore’s collection is displayed in a frame at the first landing on the Grand Staircase.

“This is a Franco-Flemish Renaissance biblical tapestry, created in the late 15th or early 16th century,” said Lauren. “It portrays the Christ child with his mother, the Madonna, and her mother Saint Anne. The three figures are seated on a throne with a chapel and a fortress in the distance.”

This tapestry is one of the older pieces in the Biltmore collection, and while Museum Services doesn’t know as much about it as they do some of the others, they continue to look for details in both the provenance of the piece and its symbolism.

“One thing we can tell, just from the design, is that it was commissioned by an extremely wealthy patron,” Lauren said. “Notice how much blue is used throughout the tapestry, both in the background, and in the robes of the Madonna and Saint Anne. Before the advent of mass-produced dyes, this ‘ultramarine’ blue—which would have been shockingly vibrant when it was first woven—was incredibly difficult to make and, therefore, very expensive.” 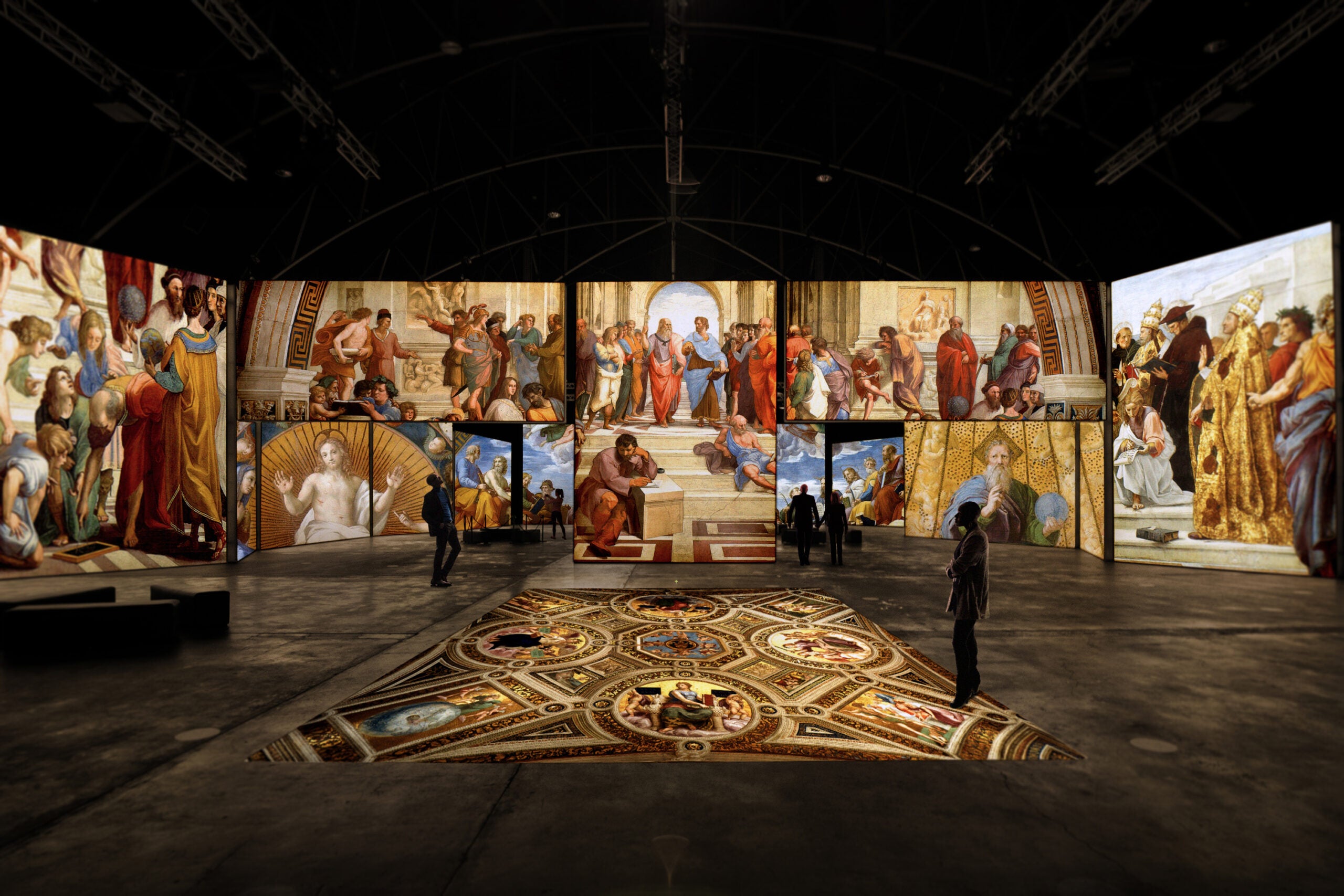 In a fitting tribute to George Vanderbilt’s lifelong passion for fine art, Italian Renaissance Alive invites you to enjoy some of the world’s best-known masterpieces in an entirely new way: immersed in the beauty and brilliance of one of the greatest artistic periods in history as it comes to life all around you.

Accompanied by a powerful operatic score and a compelling narrative, the experience is captivating, educational, and absolutely unforgettable.

Featured image: Detail from the Triumph of Prudence tapestry in the Tapestry Gallery of Biltmore House.

So exciting! Thank you for all the beautiful information on these pieces.

Immerse yourself in our new exhibition series, Legends of Art & Innovation...