Did you know Biltmore’s Bass Pond originally had two islands within it? One of the islands (or “islets,” as landscape architect Frederick Law Olmsted referred to them) mysteriously disappeared over the years. However, our horticulture team recently worked to re-create this feature as part of our mission to preserve the estate in Asheville, North Carolina.

About the Bass Pond’s Design

Biltmore’s Bass Pond—referred to as “the lake” in some archival documents—was part of Frederick Law Olmsted’s landscape plan for the estate, created more than 125 years ago. Designed to provide still water for the Vanderbilts and their family and friends to go boating, the six-acre body of water was created by damming a nearby creek and enlarging its millpond. 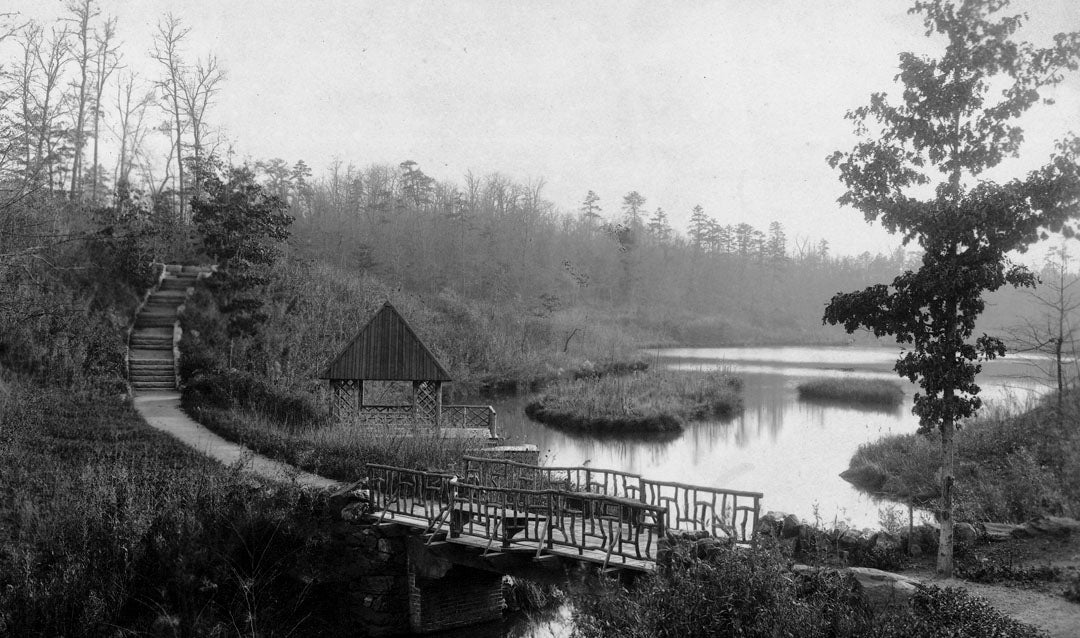 Archival image of the Bass Pond with both original islands visible, ca. 1895.

Olmsted wrote about the Bass Pond islands in a January 29, 1891 letter to George Vanderbilt:

“There were four reasons for designing the islets near the north margin of the lake: first, the effect of them would be to enlarge the apparent extent of the water… and there would at least be more effect of intricacy and mystery; second, [because of] the steepness of the ground almost everywhere at our proposed water-line on the main shore… the islands, being low and flat, are intended to serve was a disguise and relief to this circumstance; third, the islands will save cost of construction; fourth, they are needed as breeding places for shy waterside birds, many of which will only make their nests in the seclusion of thickets apparently inaccessible.” 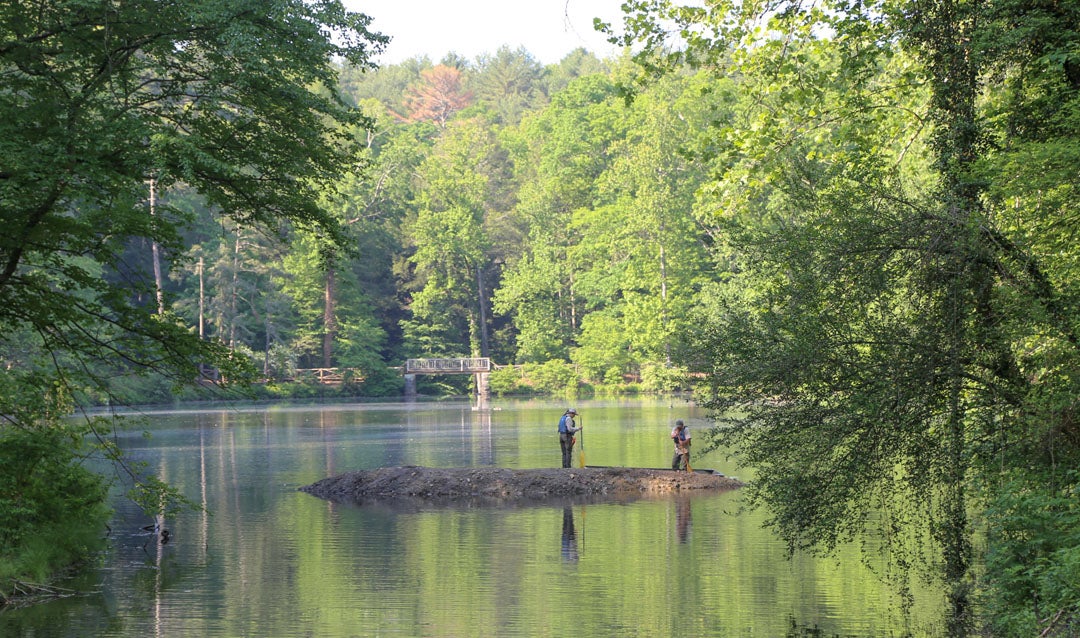 Our team sourced the clay-based soil for the new island from another estate location.

During the early months of 2022, our horticulture team began the preliminary work to install the missing island. First, they drained the Bass Pond so that the water level was below the height of the new island. Then, the pond was dredged and our crew disposed of the old sediment and material. Finally, our team brought in clay-based soil from another location on the estate to re-create the island. 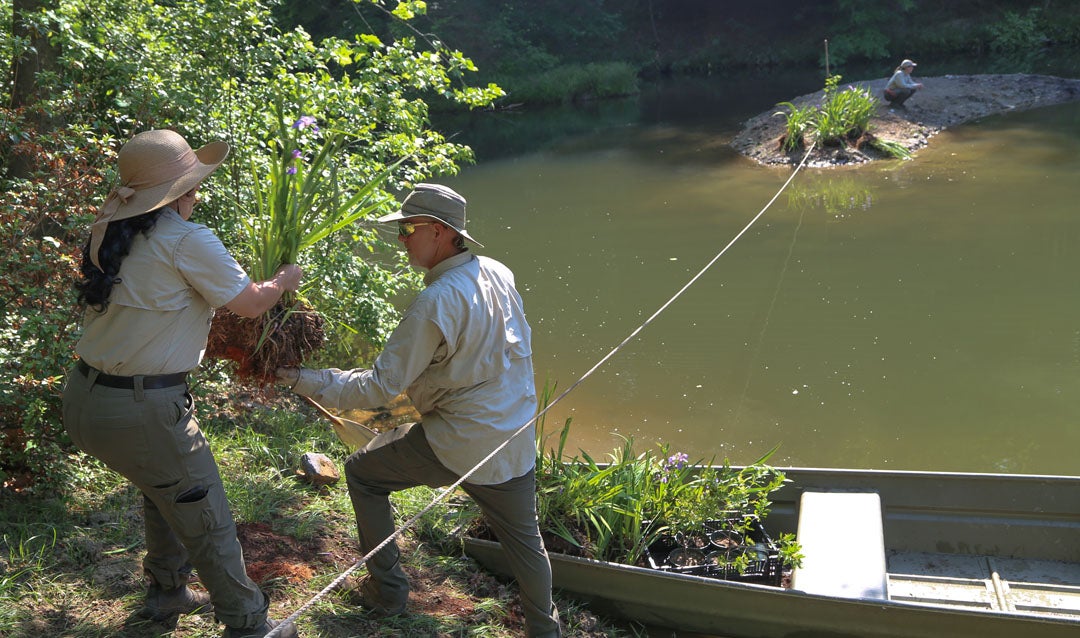 Transporting the selection of plants to the newly established island was a project in and of itself.

Landscaping of the island took place in May 2022. Six members of our horticulture team transported iris, Cliftonia, and Juncus to the island via several rowboat trips. The selection of plant material was in line with Olmsted’s original intention for the islands’ purpose. Juncus, for example, is a water-loving grass that offers habitat for wildlife, in particular the shy waterside birds referenced by Olmsted in his letter to George Vanderbilt. 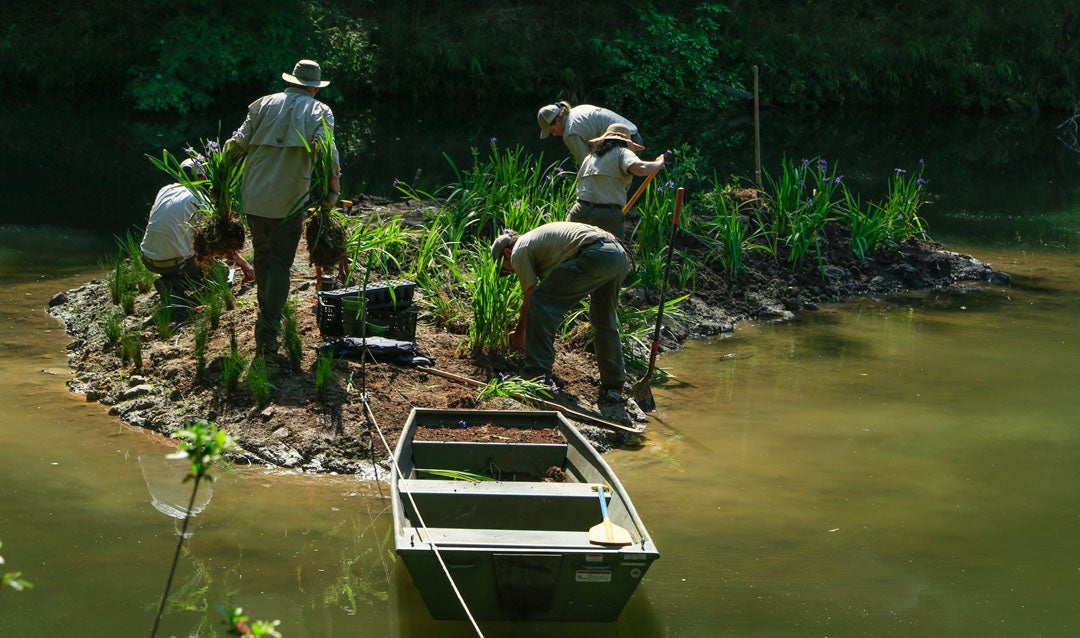 Our team intentionally selected plants that would remain true to Olmsted’s original vision.

On your next trip to the estate, we invite you to linger along the shores of the Bass Pond. Consider strolling there via the Azalea Garden Path after your Biltmore House visit. Marvel at its historic boat house and waterfall. And of course, watch the newly re-created island for those shy waterside birds—just as Olmsted intended.

the lengths they go … to keep the legacy alive!

Cant wait to check this out on my next trip!

this is beautiful to read. I believe I “meandered” here accidentally and was extremely happy to have made that trek. I only lamented I didn’t have a horse and saddlebag filled with all the necessary accoutrements of a long afternoon exploring! The horse would be necessary in case I stay to long and cannot make it back!

What a way to preserve the wildlife and to make it the original plan.

Thanks for the information. In February, I saw that the pond was drained and wondered why. Now I know. Thank you for being true to Olmsted’s vision and caring for the wildlife.