Winter is a perfect time to visit Biltmore and admire the combination of architecture, art, and sculpture that makes Biltmore House so amazing. In case you haven’t noticed every little detail, we’ve asked employees to share their favorite things so you too can appreciate what makes Biltmore special. Check back next week for another insider’s favorite!

Cathy Barnhardt, Floral Displays Manager, has spent 35 years at Biltmore and is nationally known for her work heading up our amazing Christmas decorations in Biltmore House. She began her career in the estate’s greenhouse, was promoted to manager, and then was asked to “do Christmas.”

Little did she know that 26 years later she would still be “doing” Christmas at Biltmore—a celebration that began with five trees and has grown into an estate-wide extravaganza with more than 60 decorated trees in the house alone!

For Cathy, two paintings in the Breakfast Room on the First Floor hold lasting appeal no matter how many times she sees them.

“I love the Renoir portraits,” she said. “I like Impressionist paintings and Renoir, and the Mediterranean colors remind me that one day I hope to go there.” 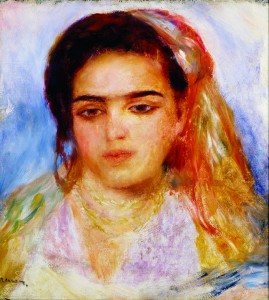 The two portraits are Young Algerian Girl and Child with an Orange, both painted in the 1880s by Pierre-Auguste Renoir as he traveled through the Mediterranean and Northern Africa.

According to our curators, George Vanderbilt acquired both paintings in 1892 from famed Parisian art dealer Joseph Durand-Ruel. Durand-Ruel is credited with doing more than just about anyone to promote the success of French Impressionists at a time when most other art critics and dealers looked upon them with disdain.

About the photos:  Child with an Orange, top, and  Young Algerian Girl, bottom right.

What happened to the Monet? I believe it was in the sitting room between Mr and Mrs Vanderbilt’s rooms?
Thank you.

Thank you for enjoying this archived information about our 2019 Christmas at...