“Cupid’s Richest Captive” was the headline that accompanied the April 1898 announcement of George Vanderbilt’s engagement to Edith Stuyvesant Dresser. 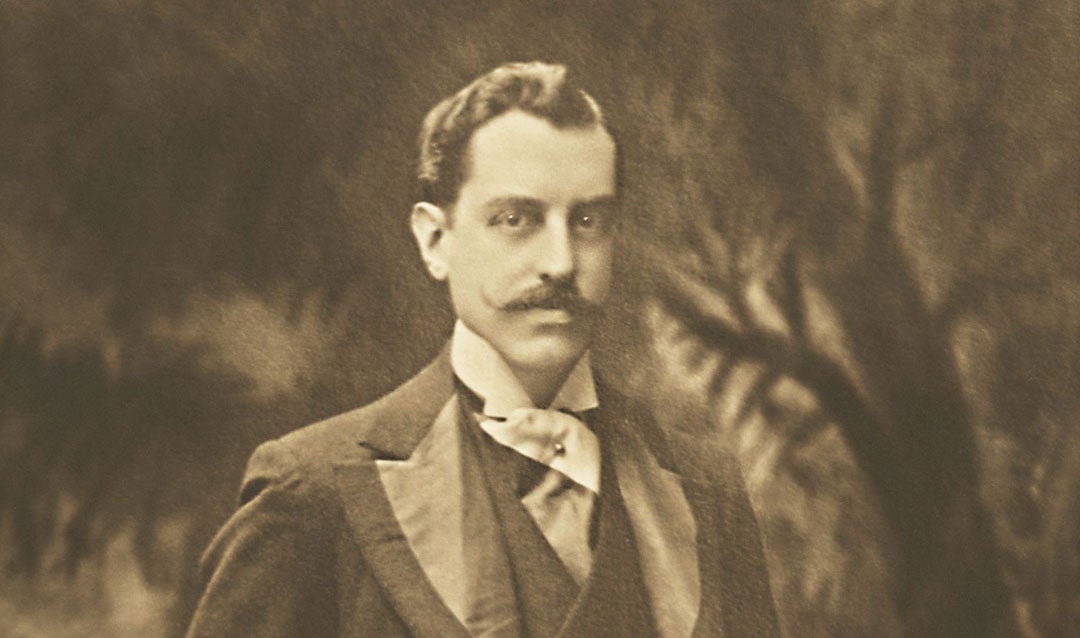 At age 36 and the only unmarried son of William Henry Vanderbilt, George was considered America’s most eligible bachelor. Termed “Cupid’s richest captive” by the popular press, the engagement was a leading topic in newspapers of the era. 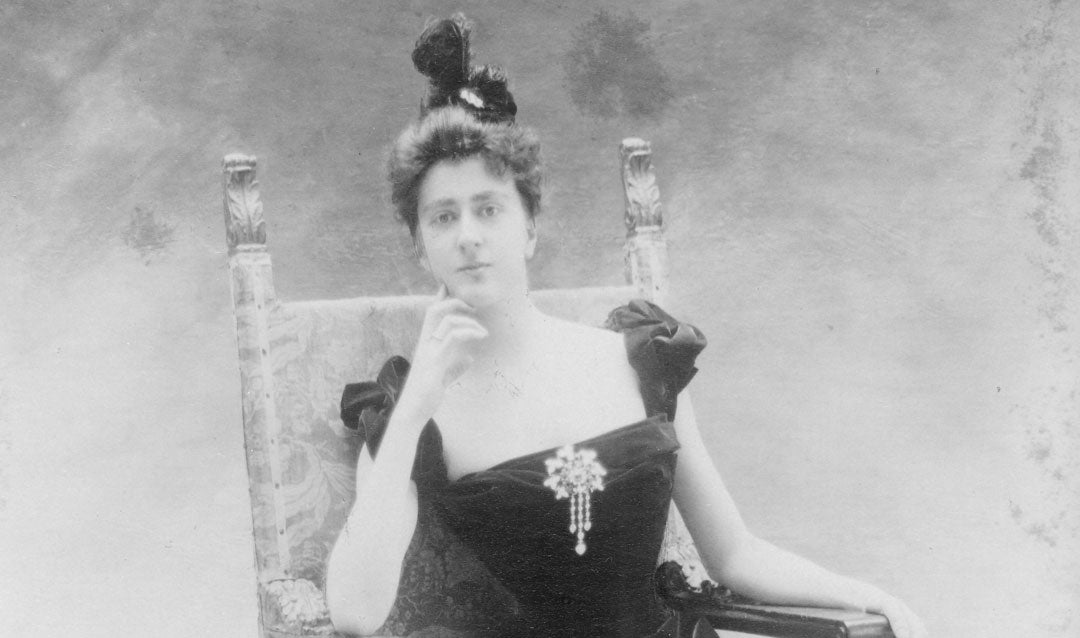 In comparison, his bride-to-be was a virtual unknown, although her ancestry included Peter Stuyvesant, the first Dutch governor of New York. Edith and her three sisters were popular members of Newport and New York society, and the “Dresser Girls” had lived in Paris after the death of their parents and grandparents.

Ten years younger than her fiancé, Edith was friends with one of George’s sisters and several of his nieces. While reporters speculated the couple became acquainted when she attended Vanderbilt’s 1897 London party for Queen Victoria’s Jubilee, it’s more likely the pair met through match-making family members.

Congratulatory correspondence for “Cupid’s richest captive” and his fiancée 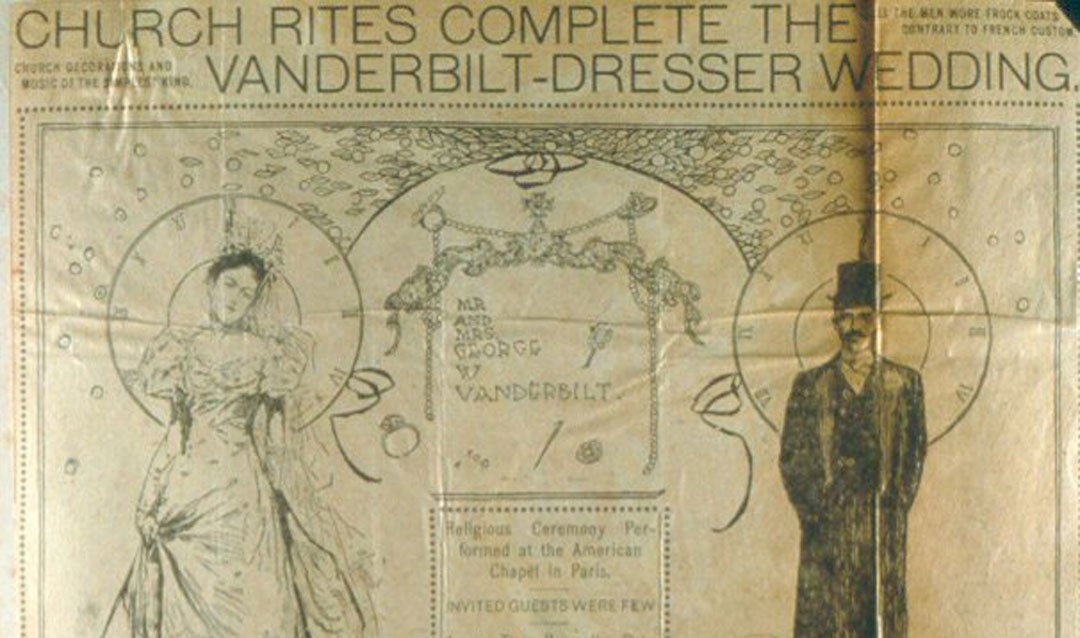 Newspaper clipping of the 1898 Dresser-Vanderbilt wedding program; illustrations were probably made from photographs of the couple.

News of the springtime engagement brought letters of congratulations from Vanderbilt’s friends, and we are fortunate to have some of the correspondence in our archives.

Author Paul Leicester Ford, who stayed at Biltmore several times and dedicated one of his most popular novels to George Vanderbilt, penned the following:

“My dear George,
I am very glad. Marriage is quite good enough for you, and is one of the few really fine things you haven’t had in your life. I wish I knew Miss Dresser better, but the mere glimpse I had of her was enough to make me like her, and time will perhaps fulfill my wish. That you both have my every felicitation, and hope for your happiness, need not be said…..It is a pleasure to me to think of you as having this great happiness added to your life. But in the big love, save a little if you can, for your affectionate friend
Paul.” 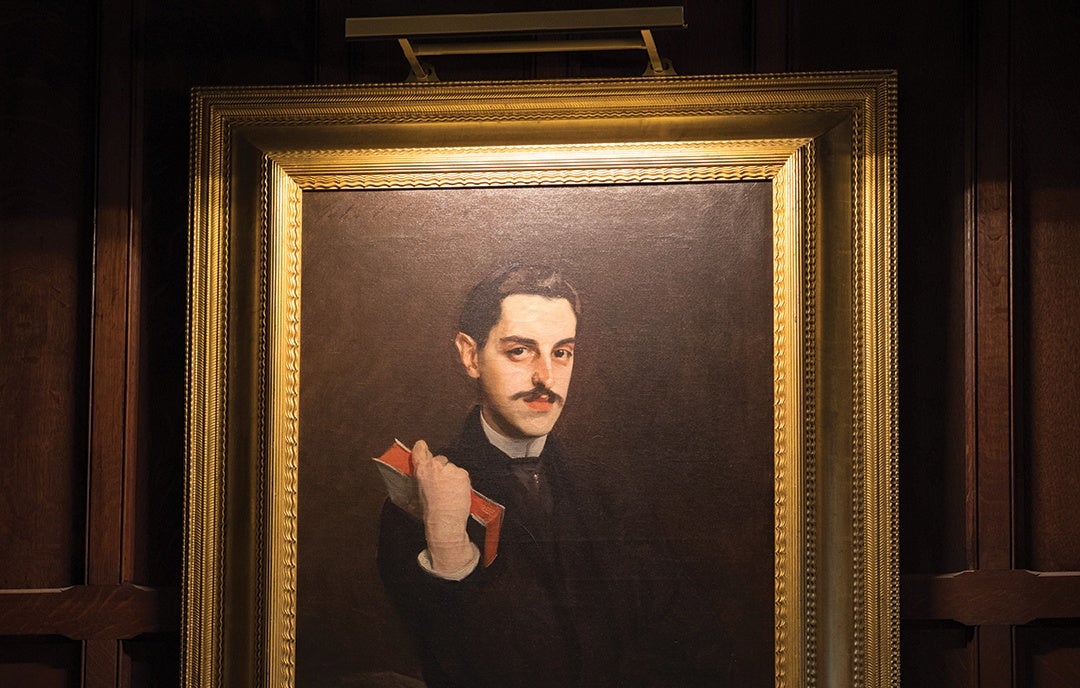 Portrait of George Vanderbilt by John Singer Sargent, ca. 1890; on display above the entrance to the Biltmore House Library.

Artist John Singer Sargent, considered the most successful portrait painter of his era, was one of Vanderbilt’s favorite artists. Six of his works are in Biltmore House, including a portrait of George that hangs above the Library door. On April 28, 1898, he wrote:

“My dear Vanderbilt
Please accept my warmest congratulations and best wishes for your engagement, and offer my hommages to the lady…I hope to see you on my way back from Venice…
Yours sincerely,
John S. Sargent”

Chauncey M. Depew, who served as New York Secretary of State and president of the New York Central Railway, was a family friend who had known George Vanderbilt all his life. On May 13, 1898, he wrote:

“My Dear George,
Accept my cordial congratulations on your engagement. Possessing as you do every thing to make a happy home, and Miss Dresser so charmingly forming the complement. Surely the future is (illegible) secure for married life as the fates have arranged it for you…
Faithfully yours,
Chauncey M. Depew”

On May 19, 1898, David H. Greer sent a letter to George Vanderbilt, who was already in Paris where his June 1 wedding would take place. Greer served as the rector of St. Bartholomew’s Church, New York, from 1888–1904.

“Dear Mr. Vanderbilt —
I am sorry I cannot be present to offer my congratulations in person in connection with the happy event which is about to take place in your life; but the steamer that takes your sisters over will hopefully carry this note and enable you to receive it before the wedding.

With best wishes of a bright future for both of you, believe me,
Very sincerely yours,
David H. Greer”

Learn more about the Vanderbilts 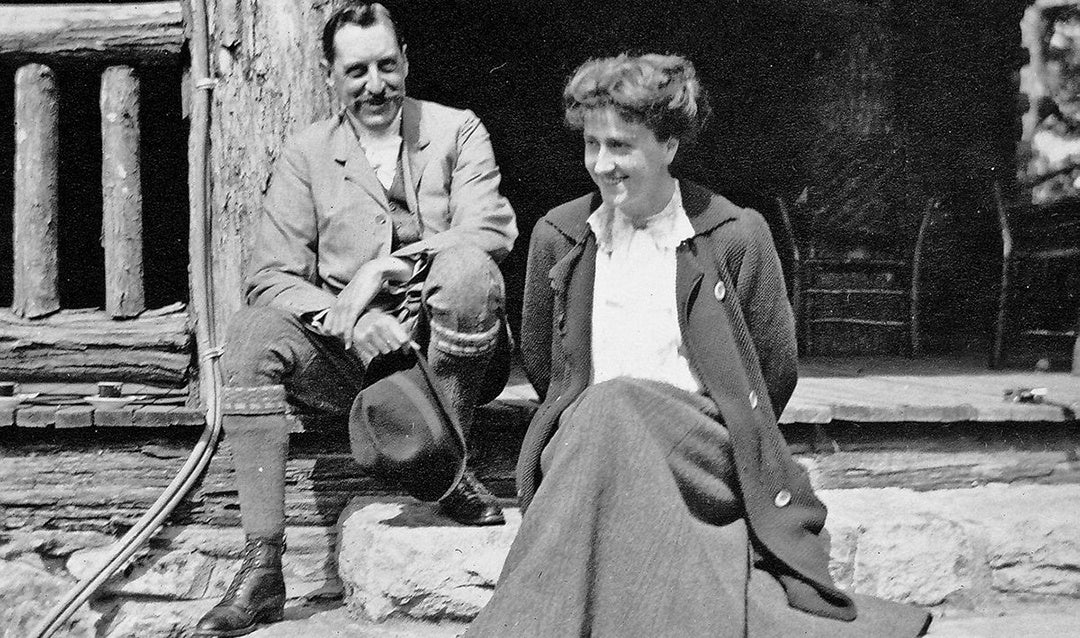 After the wedding and a four-month Italian honeymoon, the newlyweds returned to Biltmore to begin their lives together. Learn more about them by visiting The Vanderbilts at Home and Abroad exhibition at The Biltmore Legacy in Antler Hill Village, included with your estate admission.

Forty Years in Field and Forest at Biltmore

Bill Alexander may have retired from his day-to-day role as Biltmore’s Landscape...

From a young age, George Vanderbilt inherited his father’s passion for admiring...

The April 29, 1924 wedding of Cornelia Vanderbilt and the Honorable John...