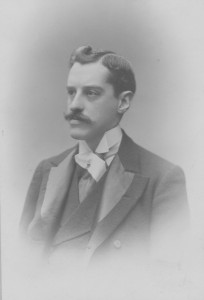 In the days around Christmas 1897, George Vanderbilt was travelling abroad preparing for a trip to India with his good friend, William B. Osgood Field. By late December, they had taken up residence in Paris and were staying at the Hotel Bristol. William wrote his mother fascinating letters detailing their days, but it is particularly interesting to see that the two travelling bachelors were also spending quite a bit a time with a certain young woman, Edith Stuyvesant Dresser. Though George was quite secretive about his intentions, Edith had clearly caught his eye. Edith, for her part, must have been receptive to his attentions as she had invited George and William, as well as some other friends, to the apartment she shared with her sister Susan to dine on Christmas day. 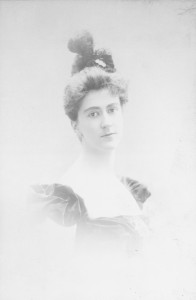 On Christmas Eve, William surreptitiously snagged one of George’s socks, tucking a small calendar for his writing case into the toe. The stocking was filled with thoughtful tokens and toys that Edith and her governess had picked up on the Parisian boulevards. In went an almanac and a small book of poetry and a newly-published volume of Quo Vadis by Henryk Sienkiewicz. George was presented with the overflowing stocking as a surprise at breakfast on Christmas morning.

Books were, of course, the perfect gift for George Vanderbilt. George, in fact, presented his friend William with a beautiful copy of Keats at that same festive breakfast.  But could it be that this volume of Quo Vadis was an expression of a secret Christmas wish from Edith? Set in ancient Rome, the Nobel-prize winning novel tells the love story of a young Christian woman and an aristocratic imperial officer. The underlying narrative contrasts the opulent and decadent culture of the wealthy Roman elite with the rewards found by those who seek a simpler lifestyle, embrace altruism and the spiritual power of Christian faith.  We will never know for sure… but, to me, it’s quite telling that George’s running list of “Books I Have Read” documents that he was reading this copy of Quo Vadis later that year, during his honeymoon, with his new bride Edith by his side.