Today, January 17, is the 140th anniversary of Edith Vanderbilt’s birthday. In celebration of her life and legacy, we thought it would be fun to share some little-known stories about her. 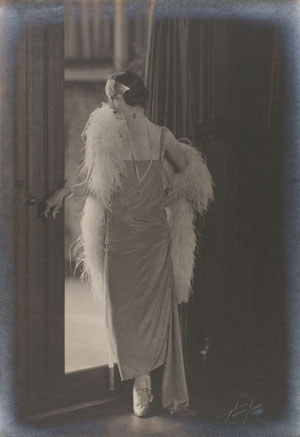 One of my favorites is a very glamorous Edith dressed as a peacock for a party in the early 1920s, as seen in the main photo above. A lover of costume or ‘fancy dress’ parties her whole life, Edith entertained often at Biltmore and clearly had a flair for the dramatic. In preparation for a party planned for August 1922, she contacted the legendary Ziegfeld Follies in New York to inquire about renting a ‘White Peacock’ costume made famous by a showgirl known as Dolores. It appears that Edith had little luck in obtaining the outfit and resorted to having her own peacock costume made a year later. It’s not completely clear at what event Edith chose to strut her stuff, but we suspect the celebration was held in honor of her daughter Cornelia’s 23rd birthday.

Biltmore’s costume collection includes seed pearl jewelry and glass bead hair ornaments which were worn at other fancy dress parties during the 1920s, and a dazzling metallic mermaid costume that will go on display in the exhibition, “The Vanderbilts at Home and Abroad” this spring in Antler Hill Village.

Edith’s love of drama began at an early age. As a child, she and her sisters frequently played charades and imaginative games of “house.” Edith and her youngest sister, Pauline, also loved witnessing the theatrical transformation of Newport’s grand interiors that were typical for Gilded Age entertaining. In a memoir, Pauline recalled helping with preparations for lavish dinner parties and then taking delight in spying on the guests!

”…In August … we children would be kept busy wiring flowers for enormous centerpieces, for those were the days when tables were overloaded and great satin ribbons lay on the table cloths; extending from one solid bed of flowers to another. The blossoms of pink hollyhocks were fastened on toothpicks and pierced into moss-filled flat baskets joined by huge bow knots of pink satin ribbons which wound their way amid silver tankards and baskets of hothouse fruits. Edith and I used to climb out on the tin roof over the dining room and peer down through the sky-light at the guests, scuttling back to bed when the roof creaked and we feared detection. Of course the voices below drowned any noise we might have made, but we didn’t realize that…”

In her teens and early 20s, Edith lived in Paris and was a member of an amateur group that frequently hosted “theater parties.” If the peacock photograph is any indication, Edith’s penchant for drama was most pronounced during the Roaring Twenties, a time when many women felt a heightened sense of independence and freedom to express themselves creatively.

Edith hosted a number of masquerade balls at Biltmore House, as well as tableaux vivants, a popular form of entertainment in the late 19th and early 20th centuries. French for “living pictures,” tableaux vivants were elaborate productions in which costumed participants would pose in the guise of mythological or literary figures, famous paintings or individuals from history. These amusing spectacles were enhanced by live music, props and dramatic lighting.

No matter the occasion, it seems that Edith always took pleasure in finding ways to enhance the everyday. Her spirit lingers on, inspiring so much of what we do at Biltmore.

Thank you, Edith – and Happy Birthday!