How Did Our Christmas Tradition Begin?

Although George Vanderbilt moved into Biltmore House in October 1895, the house did not officially open to guests until Christmas Eve of that year. Great efforts were made to ensure all (or most!) would be ready by this special day. Mr. Vanderbilt was still a bachelor during the first Biltmore Christmas and his mother, Maria Louisa, presided as hostess.

Correspondence between Vanderbilt and his staff indicates that planning was intensive and no detail was left unattended. Managers debated which nearby county had the best holly and the most desirable mistletoe, while staff scouted for the perfect candidate for the Banquet Hall Christmas tree.

“I quite agree with you that we should have a very large tree for this occasion; in fact, I think a twenty foot tree in that large Banquet Hall would be rather dwarfed”.

When George’s mother, several of his brothers and sisters and their spouses, and assorted nieces and nephews arrived, they were greeted in the Banquet Hall by a splendidly tall tree laden with gifts for estate workers. At the foot of the tree was a table piled high with family gifts. Because of this, the Banquet Hall has always been the focal point for Christmas celebrations in Biltmore House. 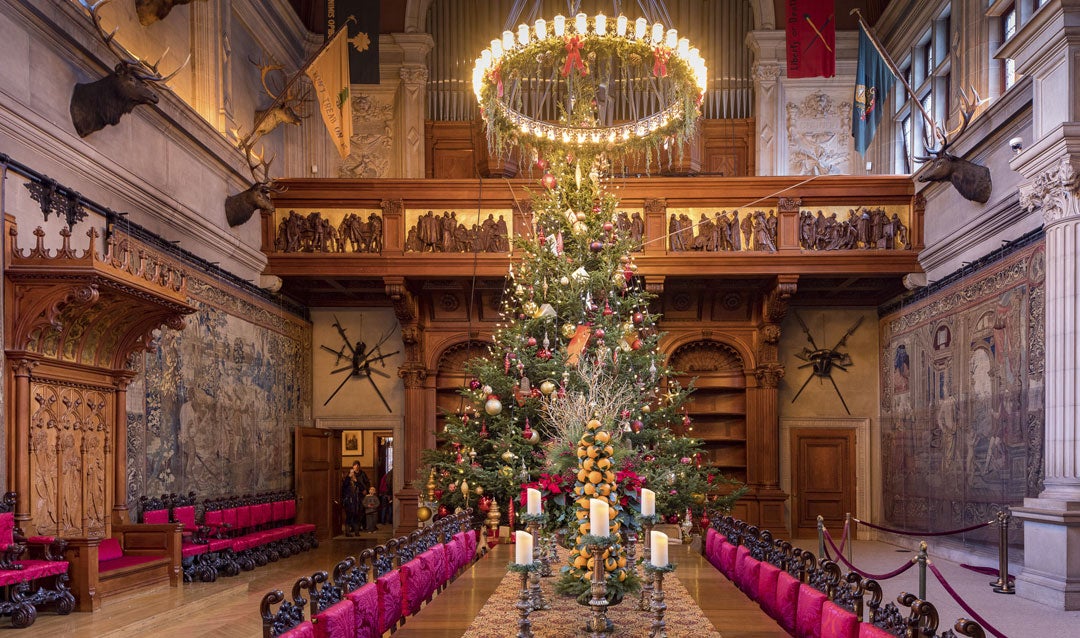 The Banquet Hall tree is a Christmas tradition at Biltmore

The family and guests gathered around the forty-foot Banquet Hall table for elaborate dinners served both evenings. Mr. Vanderbilt’s niece Gertrude kept a series of Dinner Books in which she recorded the seating arrangements of all of the parties and dinners she attended as a young woman, and she was one of the guests at the first Christmas dinner here in Biltmore House. Gertrude kept two Dinner Books in 1895, and the Christmas meal at Biltmore House was the 193rd formal dinner that she attended that year. In her diagram of the dinner, she listed 27 Vanderbilt family members. It was said to be the largest gathering of the family since the death of William Henry Vanderbilt, George’s father, in 1885.

In addition to the grand meals and festive décor, stockings hung on mantles, plum puddings and mince pies were served, and George’s mother read ‘Twas the Night Before Christmas’ to the children. All in all, it must have been a grand time—one article even stated that the family exchanged gilded and jeweled Christmas cards.

The Banquet Hall tree has been a Biltmore Christmas tradition for 125...

Decorations in Biltmore House: Christmas 2020 by the Numbers

Join us for a very special Christmas at Biltmore this year as we mark...