It may not be the first thing that comes to mind when you think about Biltmore, but opportunities to go bird watching are a wonderful way to enjoy all its natural beauty—even in the winter.

During his 34 years with Biltmore, Bill Alexander, Landscape and Forest Historian, has identified more than 200 species of birds on the estate.

“The largest river in Western North Carolina runs through the estate, and we have the Lagoon, Bass Pond and streams with aquatic plants, meadows, pastures, and parklands, thickets, pine forests, and hardwoods. All these habitats are ideal for different types of birds,” Bill said.

Combine these water features with the estate’s meadows, pastures, fields, and woods, and it’s easy to see why the estate is such a prime birding venue as well as an official site on the North Carolina Birding Trail.

According to Bill, winter is a good time to see waterfowl, especially ducks such as buffleheads, hooded mergansers, teal, ring-necked ducks and occasionally pintails and shovelers. Some winters, we may have flocks of blue and snow geese interspersed with the ubiquitous Canada geese. You may even see great blue herons or common snipe in and around wet spots, creeks and drainage ditches. 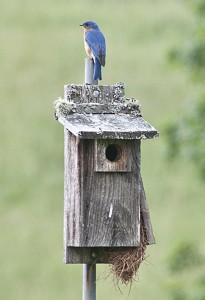 Some of our year-round birds include blue jays, cardinals, sparrows, crows, blackbirds, mourning doves, bobwhites, Carolina chickadees, tufted titmice, red-tailed hawks, ruffed grouse, and turkeys. Pileated woodpeckers and flickers are plentiful, and you can spot red-bellied and downy woodpeckers. Eastern meadowlarks can often be seen and heard in the fields near Antler Hill Farm even during the winter months. Watch for killdeer and bobolinks as well.

Throughout Western North Carolina, bluebirds and robins are common and many make their presence known at Biltmore in winter, too. Bluebirds—famed for their appetites for insects—are encouraged to stay and raise families with the estate’s Bluebird Nest Box Program. Employees volunteer to monitor more than 100 bluebird boxes, checking to see if boxes are occupied, recording the number of eggs and chicks, and cleaning out nests between broods.

The eerie screeching and hooting of owls 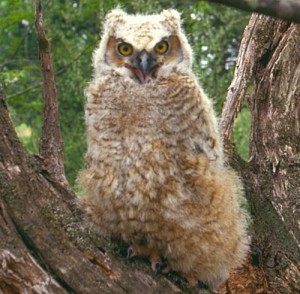 Our most common owls, the great horned and screech owls are woodland birds that prefer mature forests and parklands like those that blanket Biltmore. Great places to find them include the woodlands near the Bass Pond, the trail around the Spring Garden, and forests around the Inn. Great horned owls begin breeding and nesting in January and February and their calls are most often heard this time of year. Sometimes you can locate a screech owl on a low branch in the forest just before dark by listening to its mysterious quavering call. Or, if you spend as much time as Bill does on the estate, you may get a closer look.

“I was walking in the woods just before dawn one winter, and something hit me on the top of my head,” Bill said. “All of a sudden my toboggan was flying through the air in the clutches of a great horned owl!”

Protecting birds for a century

Birds and Biltmore have been a thriving pairing for more than a century. George and Edith Vanderbilt were sustaining members of the N.C. Audubon Society, and estate employees were advocates for protecting birds. Landscape Architect Frederick Law Olmsted designed islands for the Lagoon and Bass Pond as safe places for nesting birds. Today, we intentionally leave some fallen trees, snags, and uncut meadows as habitat for birds and other wildlife.

According to Bill, anyone can become a birder with a decent pair of binoculars and a bird book. “Start by looking for birds by body size, flight pattern, and song,” he advised. “The best viewing times are typically early morning or late afternoon. It’s a great way to enjoy the outdoors in winter.”

Photos of the tundra swan at the Lagoon and the immature great horned owl were taken by Bill Alexander on his many forays around Biltmore.

Did you know Biltmore’s Bass Pond originally had two islands within it?...