At the age of 12, George Vanderbilt began keeping meticulous records in a series of journals called “Books I Have Read,” a habit he continued throughout his life. By his death in 1914, he had logged 3,159 books, which means that between 1875 and 1914, he read an average of 81 books a year.

It was well known that George was a bibliophile. A turn-of-the-century New York journalist wrote of him:

“He was a bookworm, a student… And his love of books came all from his own inner consciousness, for he was not graduated from any college, and his education, while not neglected, had not been carried beyond the ordinary limits of high schools, though now, I doubt not, he is one of the best read men in the country.”

A testament to his passions for books and collecting, the walls of the Library in Biltmore House are lined with walnut shelves housing about half of George’s personal collection of 20,000 volumes.

The collection ranges in subject from American and English fiction to world history, religion, philosophy, art, and architecture. About one-third of the volumes were antiquarian purchases, the oldest of which is an Italian work published in 1561. 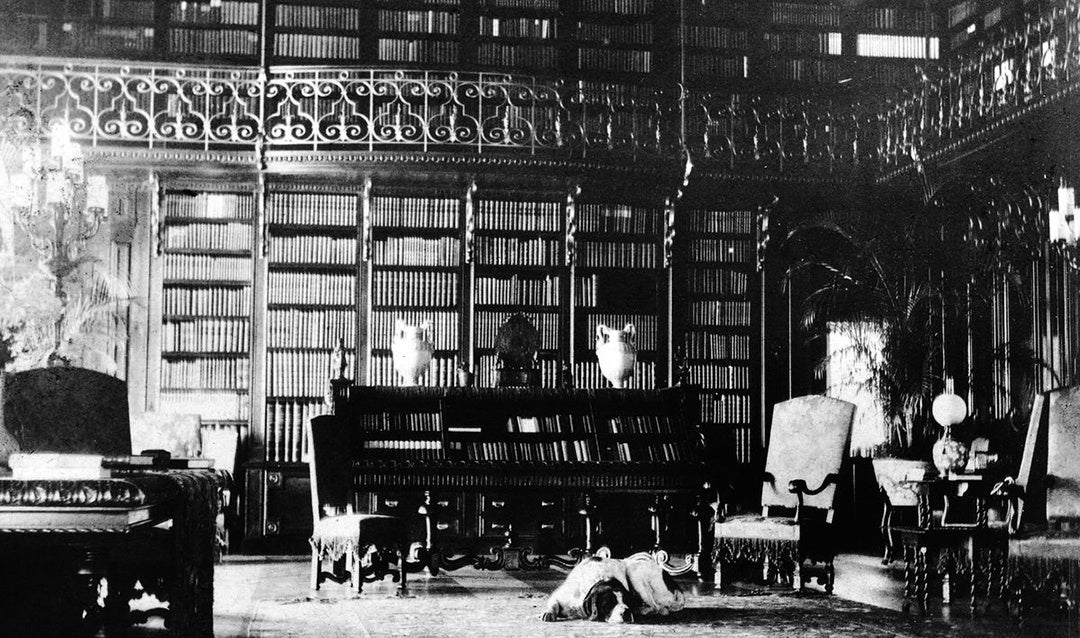 The collection also includes many French titles—4,326 to be exact—and George’s “Books I Have Read” journals show that he read many of them. Both fiction and non-fiction, the volumes speak to George’s interest in France and its culture as well as his fluency in the French language.

Just as the journals help us to understand how well-read he was, they give us insight into which authors George favored, though it’s difficult to say who his favorite actually was. 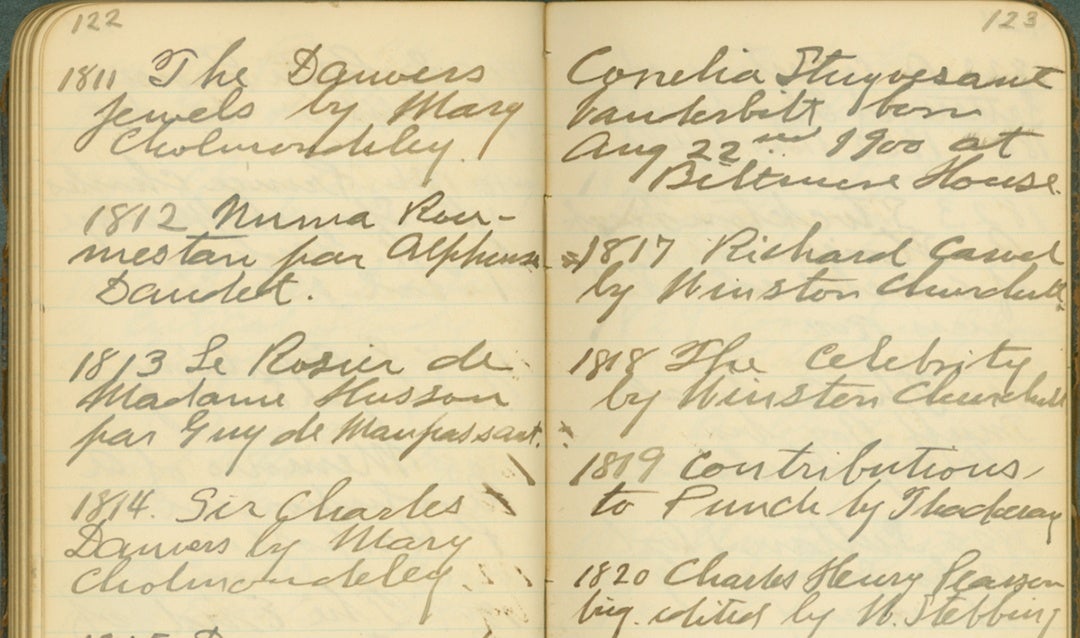 We know he was fond of French author Honoré de Balzac’s work. George noted having read more than 80 Balzac titles and there are a total of 218 books by the author in his collection.

We also know that of the 30 works by Charles Dickens listed in his journals, George read many of them more than once. For instance, there are two mentions of The Pickwick Papers, which George read at age 13 and again when he was 25. 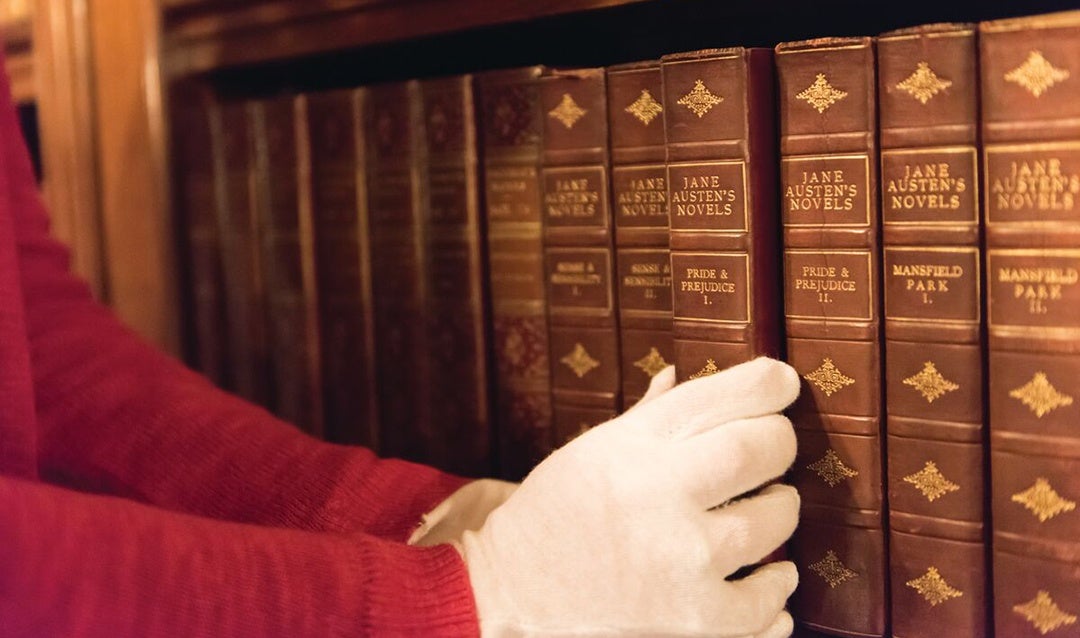 George also favored Sir Walter Scott. He read many of his 273 books by Scott two or three times. He read Waverly, a groundbreaking historical novel, in 1875, 1897, and again in 1910.

Most of the books George collected were sent to one of the great bookbinders of the period, such as Riviere, Stikeman, Lortic, or David. A few months later, they would return, beautifully bound in Moroccan leather with gilt lettering and decoration, to be placed on the shelves of the Library in Biltmore House.

Did many of the books have to be restored ?

Did George Vanderbilt ever have a private librarian?

Great question! George Vanderbilt never hired anyone with the formal title of “Librarian.” However, periodic catalogues of the books were compiled over time. The first was conducted by J. O. Wright, a New York book dealer and acquaintance of George’s, in 1898. We believe George himself also conducted a full catalogue in the early 1900s. Neither catalogue made it down to us. Three more major catalogues were conducted between 1924 and the 1980s, and we now work off the 1980 catalogue to regularly inventory the collection.

Is the most recent catalogue available to the public?

Dear Brittney,
While our Museum Services team maintains a catalog of Mr. Vanderbilt’s books, it is not available to the public.

Would you ever release a transcript of the book to the public?

Thank you for your question. There are no plans to release a transcript at this time.

Are any of George’s personal diaries available to be studied?

Thank you for your question, Kristen. Diaries and other primary materials are not available for study without permission from our Museum Services team. They evaluate each request on a case-by-case basis.

Is there a PDF or other type of document available with the full catalog list of the Library’s books?

Thank you for your question, Mike. Our Museum Services team maintains a catalog of Mr. Vanderbilt’s books, but it is not available to the public.

Is there an index of all the books in the library?

Thank you for your question, Ethan. Our Museum Services team maintains a catalog of Mr. Vanderbilt’s books, but it is not available for public viewing.

Was GW Vanderbilt a fan of Henry James? How many of James’s titles are in the library?

Dear Linda,
Thank you for your question. According to our Museum Services team, George Vanderbilt was not just a fan of Henry James — they were friends! James was invited to stay at Biltmore several times; his accounts of his experiences are one of our most valuable sources regarding what it was like to be a guest of George and Edith Vanderbilt. With that in mind, it’s hardly surprising that there are 140 volumes authored by James throughout Biltmore House.

Did George Vanderbilt have a bible and did he read it?

Thank you for your question. Here is the response from our Museum Services team:

“George Vanderbilt had not only one bible, but at least eight. Starting from childhood, we know that he was reading his bibles and writing down his thoughts and reflections in his personal diaries. We believe he was not only a well-educated, but deeply devout man, which accounts for his construction of All Souls’ Church in Biltmore Village as the primary place of worship for he and his family.”

What books by or about Shakespeare are in the library?

Dear Richard, Thank you for your question, which we shared with our Museum Services team. Here is their answer: “We have about 90 individual volumes in the collection by or about William Shakespeare. They range in date from 1807 (Tales from Shakespeare designed for the use of young persons, Vol. I & II by Charles Lamb) to 1937 (a Complete Works of William Shakespeare). There are around 9 versions of the “complete works,” some in one volume and some in separate volumes (in some cases, many volumes) forming a set. There are approximately 12 books about Shakespeare’s life and writings.… Read more »