Cornelia Vanderbilt’s Wedding: It’s All in the Details

Many people say that the success of an elaborate event lies in the details. Cornelia Vanderbilt’s wedding to the Hon. John F. A. Cecil on April 29, 1924 was no exception—from photographers to invitations to accommodations, many hands insured that all was perfect for the big day.

According to Lori Garst, Biltmore Curatorial assistant, society columns were aflutter as soon as rumors began about the engagement of John Cecil to Cornelia. Letters from the Washington Times and other inquirers arrived at Biltmore asking if the engagement rumor was indeed true. No information was officially released by Edith Vanderbilt until the decision was made as to what photographer would capture the moments of the wedding and take the official bridal portrait for the newspapers.

A formal announcement was made at a dinner hosted by Mrs. Vanderbilt at Biltmore on March 8, 1924. After much conversation, Mrs. Vanderbilt awarded two professional photographers from Washington, D.C. the job. Underwood and Underwood photographed the actual wedding, while Harris Ewing captured incidental photographs including the social whirl which occurred the week prior to the wedding. 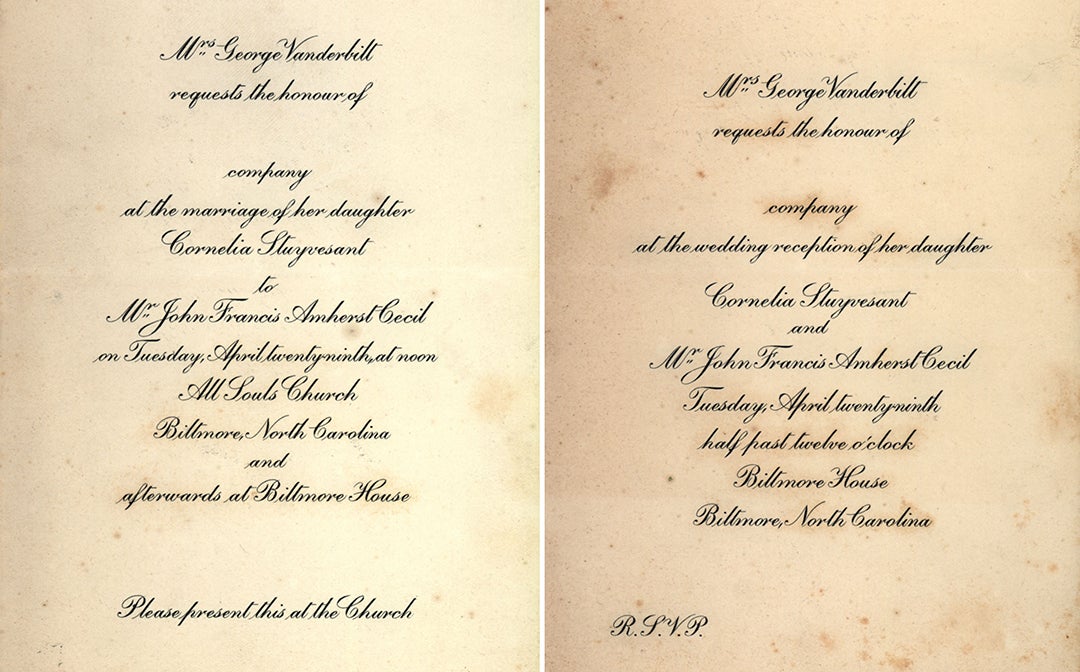 With guests arriving from across the globe, Mrs. Vanderbilt’s secretary, William Ashby, had the job of making travel arrangements to Biltmore and arranging accommodations for the wedding party, close family, and friends. Most guests stayed at the Grove Park Inn, Biltmore Country Club, and Kenilworth Inn. However, 43 guests including members of the wedding party stayed in Biltmore House. Ashby sent extensive instructions for cleaning and furnishing Biltmore House to Mrs. Donohue, the head housekeeper, as early as March 15.

Rooms were updated with new wallpaper and paint, iron beds and mattresses were ordered for the visiting guests’ staff, and all sheets were washed and ironed. The bride’s wedding party stayed in the Oak Sitting Room and Mr. Vanderbilt’s Room, while the maid of honor, Rachel “Bunchy” Strong, stayed with Cornelia in her room. The groomsmen stayed at the Biltmore Forest Country Club which opened just two years prior. 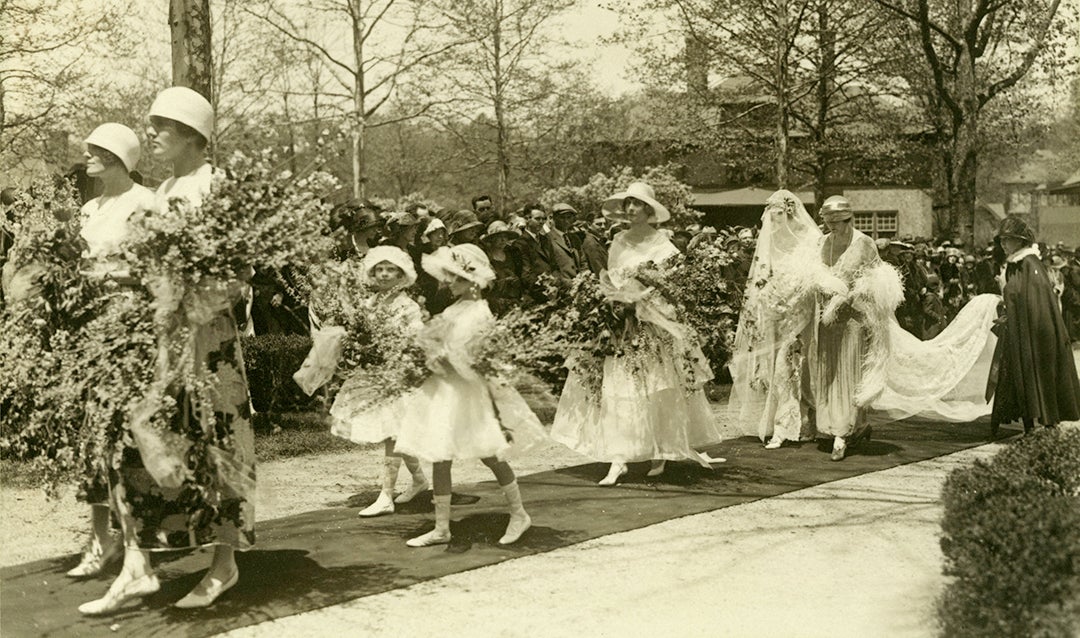 He also kept lists of last minute specifics to make sure nothing was forgotten. His records included seating charts for the church, train reservations for guests’ departures including their preferred train accommodations, wedding gifts and addresses, and cars to be provided for the guests’ convenience. As a final detail, Mr. Ashby secured the assistance of the Biltmore Fire Department to sprinkle the streets of Biltmore with water to keep the dust down.

The Asheville Citizen published extensive accounts of the wedding for two days. While many of the details of the wedding ceremony are found in these articles, the lists and correspondence found in Biltmore’s archives give us a true understanding of the specific arrangements made to insure that Biltmore’s only bride had a perfect day. 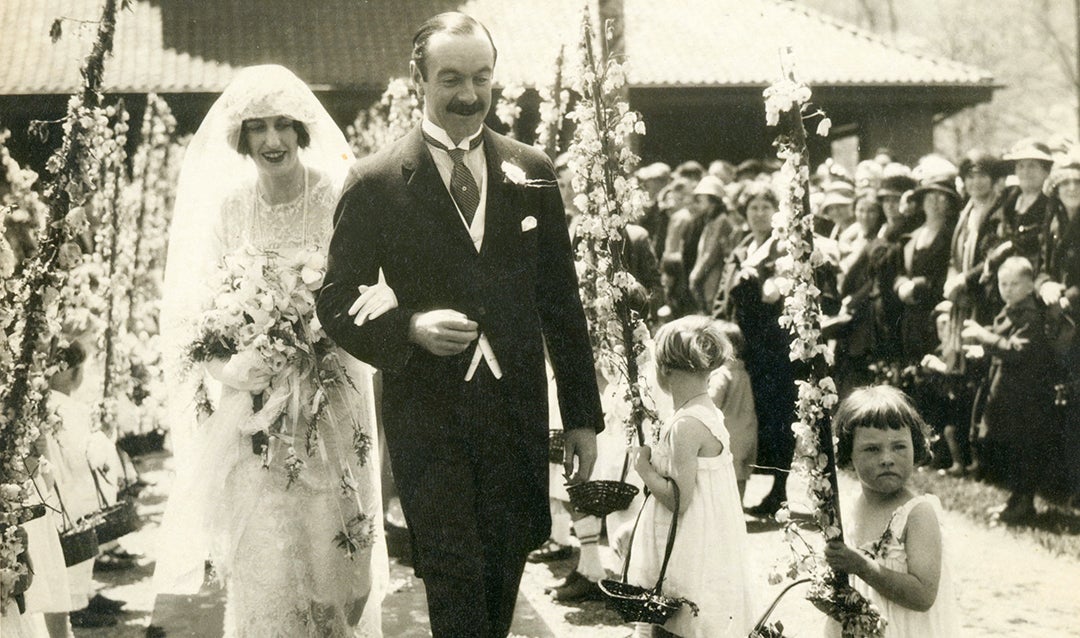 The Honorable and Mrs. John F.A. Cecil as they left All Souls Church

The First Bride of Biltmore

The sun rose clear and beautiful from the hills that surrounded Biltmore.
All the world seemed happy on that day.
The daughter of the house was to be married.
The beautiful Cornelia who knew all the mountain people;
The Cornelia who loved the house and grounds;
The Cornelia who was loved by all.
The wedding bells pealed joyfully from the belfry of the little old church.
The tenants were crowding to the gate to behold their beloved mistress.
The guests crowded into the church.
The musicians played his best of the little organ.
Finally the bride entered the church escorted by eight bridesmaids and leaning on the arm of her widowed mother.
She looked more beautiful than ever before.
John Cecil, her bridegroom, had reason to smile proudly on his pretty Cornelia.
The marriage service was gone through with, and when Cornelia walked out, with a radiant smile on her face, the children streamed flowers at her feet.
Then they went back to the house.
The enormous rooms were fuller than ever before as the crowd surged forward to congratulate the first bride of Biltmore House.
Her English husband shook hands with a proud smile.
But, at last, it was over and the setting sun shone rosily over the young couple as they started on their honeymoon.

I am absolutely fascinated with Biltmore and all of the wonderful stories of the family. ❤

You should read The Last Castle and Lady on the Hill 🙂