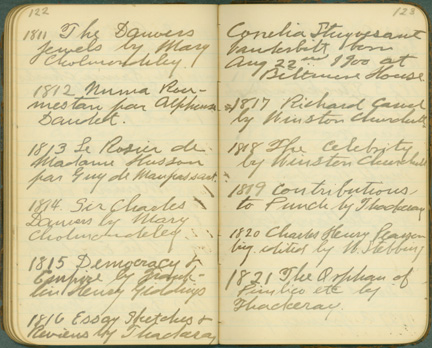 Currently on display, now through May, in the exhibit case in the lobby of the Inn on Biltmore Estate is a collection of books from George Vanderbilt’s time and a look at his reading habits.

George collected many fine things, including a personal library of 22,784 books that he selected with care, and treasured throughout his life. From the age of 12 until his untimely death at 51, George was an ardent reader and appreciator of literature. We know so much about his reading habits today because he kept meticulous records of all the books he read in a series of journals called “Books I Have Read.” In addition, he kept an index in a separate journal, with an alphabetical listing of titles by author and the dates that he read them.

We can’t answer who George’s favorite author was, but his journals give us a few clues. George seems to have enjoyed Charles Dickens’ work. Included in the 30 listed titles by Dickens are two mentions of “The Pickwick Papers,” which George read at age 13, and again when he was 25. We also know that he must have been a fan of Sir Walter Scott, given the 273 books by Scott in his collection. George read many of these books two or three times.  For example, he read “Waverly,” a groundbreaking historical novel, in 1875, 1897 and again in 1910.

One feature in George’s record-keeping that we find particularly touching is that, tucked in among the list of authors and titles, are mentions of precious life events. In 1900, for example, he noted the birth of his daughter, Cornelia, within a list of French and English novels he had been reading.

George was also very interested in France. There are 4,326 French titles in his book collection, and the “Books I Have Read” journals show that he read many of them. Honoré de Balzac must have been another favorite author, because he noted having read more than 80 Balzac titles, the majority of which were in French. There are a total of 218 books by Balzac in George’s collection.

When George was a young man of 14, he read James Fenimore Cooper’s novel “The Last of the Mohicans.” Interestingly, much of the 1992 film version of that novel was shot on location here at Biltmore.

The year before his death, George read “The Life of Samuel Johnson” by James Boswell. Samuel Johnson was an English poet, essayist and literary critic, and many scholars have claimed that Boswell’s work is the greatest biography ever written in English. George’s interest in quality literature was a lifelong pursuit, and we are very thankful to have such a detailed guide to his reading life.

Inset: George’s “Books I Have Read” journal opened to the 1,817th entry: “Richard Carvel” by Winston Churchill. Right above it is George’s note about daughter Cornelia’s birth on Aug. 22, 1900.

At the age of 12, George Vanderbilt began keeping meticulous records in...