Family heirlooms are wonderful, even for a Vanderbilt. For Lori Garst, Curatorial Assistant in Museum Services, her favorite thing in Biltmore House originally came from George Vanderbilt’s father.

During her 20 years at Biltmore, Lori has handled and cataloged more than 75 percent of the items in the collection. While she’s discovered many wonderful things over the years, one item holds particular allure.

In the Third Floor Living Hall is a carved library table that George Vanderbilt inherited from his father, William H. Vanderbilt. 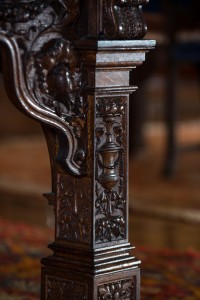 “I love the richness of the table with its subtle but elaborate carvings, and the fact that it came from William Vanderbilt’s Fifth Avenue home,” she said.

She is equally impressed with its history; the table and several elaborately carved display cabinets in the room were made by Herter Brothers. In the late 1800s, the New York company was one of the country’s leading cabinetmaking and decorating firms. The table and cabinets originally graced the palatial Fifth Avenue mansion William Vanderbilt constructed that spanned the entire block between 51st and 52nd streets in New York City.

In addition to his furnishings, George’s father passed on his love of art and his philanthropic interests to his youngest son. Before William Vanderbilt’s death in 1885, his collection of some 200 works by Old Masters was termed the finest private collection of paintings and sculpture in the world. He provided extensive funding to the YMCA, the Metropolitan Museum of Art, Vanderbilt University, and Columbia’s College of Physicians and Surgeons.

Check back next week for another inside look at our favorite things!