Nonsense and a Very Good Time

To mark the turning of 1901 into 1902, George and Edith Vanderbilt hosted a house party for 20 of the movers and shakers of Boston and New York society. Among the revelers that year were Larz Anderson, an American diplomat who had served in Rome and London, and his wife Isabel, an author of children’s books and travelogues. 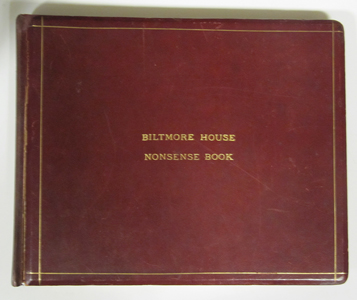 To commemorate the week-long festivities, Larz left an illustration in the Vanderbilts’ “Nonsense Book,” a bound leather volume full of notes and scribbles, rhymes and limericks inspired by one of George Vanderbilt’s favorite authors, Edward Lear. With entries from many of the Vanderbilts’ guests, the Nonsense Book gives us a glimpse into the various entertainment activities held at Biltmore.

Larz’ doodle is one of my very favorites in the “Nonsense Book.” Drawn as if it were a scrap from George’s print collection, the top reads: “For the Dürer Room – In Memory of New Years Week MCMII.” The “Dürer Room” refers to a den off of the Library where George Vanderbilt displayed many of his prints by the famed artist Albrecht Dürer, a brilliant German virtuoso of the late 1400 and early 1500s.  Dürer’s prints, including The Triumphal Arch of Maximilian which now hangs in the Music Room, are museum-quality masterpieces that one wouldn’t expect to find in a private home.

Larz was impressed with Vanderbilt’s collection of engravings and was struck by the design and layout of Biltmore House, reporting to his mother by letter that “well, we all agree it is the finest thing in America – and one of the finest in the world….” Their week started off with several days of bad weather, but a few days into their stay, Larz wrote “today is beautiful… the air is magnificent and yesterday I had a ten mile climb over the mountains.”

Apparently, Larz also got in a good bit of bicycling during his stay. Echoing Dürer’s artistic style, Anderson draws himself astride a bike peddling across the estate and past the Esplanade.  A small figure labeled “AD” for Albrecht Dürer follows a path toward the eastern façade of Biltmore House.  Anderson labeled the cartoon of himself with his initials, “LA,” in the same distinctive script that Dürer used to sign his works. Larz’s doodle documents the mountainous scenery he enjoyed firsthand and the fine weather that finished out the first week of their new year. And, quite amusingly, he references several of the Vanderbilt family’s St. Bernards, including Cedric and his mate Snow, who presumably could often be found flopped down on Biltmore’s gleaming herringbone floors in a manner resembling a polar bear rug.

An iteration of the original “Nonsense Book” is still in use today. It resides in the lobby of the Inn on Biltmore Estate, and our guests are welcome to sign it and describe their adventures during their stay.

Top: Larz Anderson left his amusing mark in the Vanderbilt “Nonsense Book,” detailing his frequent bicycle rides around the estate.

Inset: The original “Nonsense Book,” from the Vanderbilt archives.

To create A Vanderbilt House Party, our Museum Services team worked with...

The April 29, 1924 wedding of Cornelia Vanderbilt and the Honorable John...