Remembering our Christmas past

Christmas has always been celebrated in grand style at Biltmore, beginning with the opening of Biltmore House on Christmas Eve 1895 and continuing today with Christmas at Biltmore. The festivities have always included friends and family, plus a special party for employees of the estate.

While George Vanderbilt was still a bachelor, he enlisted the help of Mrs. Charles McNamee, the wife of his friend who assisted in purchasing land for the estate, to provide Christmas gifts for 300–500 guests, including estate workers and their families. Mr. Vanderbilt greeted everyone in the Banquet Hall on Christmas afternoon, and members of his own family helped distribute the gifts which included Christmas trees and trimmings for estate employees to decorate their own homes.

In 1897, Biltmore’s Christmas celebration took place at All Souls Parish in Biltmore Village because George Vanderbilt was away from home. According to a report in the Semi-Weekly Citizen, there were “toys and candy and cakes and oranges for the little ones, and books and articles useful and ornamental, dress goods and jerseys, ties and gloves, for the older folk. As in previous and future celebrations, refreshments were served, including ice cream, cake, and bananas.” 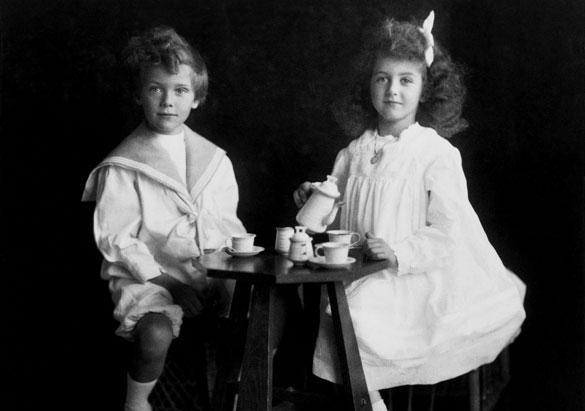 Celebrating with friends and family

George Vanderbilt married Edith Dresser in 1898, and she took an immediate and active interest in the estate’s annual Christmas festivities. In 1905, when George and Edith Vanderbilt’s only child Cornelia would have been five years old, the New York Times reported the following details about the holiday cheer at Biltmore:

“Mr. and Mrs. George W. Vanderbilt this afternoon provided for nearly a thousand children of Biltmore estate employees a big tree in the banquet hall of the chateau. The little ones were loaded with useful gifts and toys…bought in Asheville in the last week…Mr. and Mrs. Vanderbilt welcomed each of the little guests, many of whom came twenty miles from the coves and mountain tops of the Vanderbilt forest domain, some walking, some by ox team and some mule back…. Mr. and Mrs. Vanderbilt…personally distributed all the gifts, aided by Mrs. Edith Wharton, Mr. Wharton, and Mrs. Ernesto G. Fabbri (George Vanderbilt’s niece].”

In her oral history, Edith Cauble, whose parents worked on the estate, recalls:

“Christmas parties where Mr. Vanderbilt stood on one side of the front door of the House in tails, and Edith stood on the other side wearing a long velvet dress giving out oranges and candy. In the Banquet Hall there was music and Cornelia would run around with the other children.” 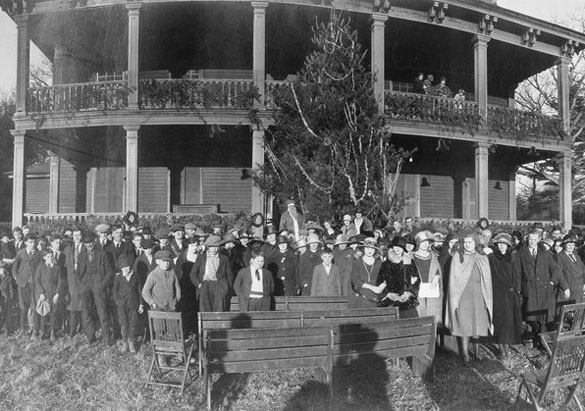 Edith and Cornelia Vanderbilt continued the employee Christmas parties even after George Vanderbilt passed away in 1914. In 1916, the event took place outdoors at Antler Hall—a large home originally located where The Inn on Biltmore Estate™ now sits. In the archival photograph featured here, you can see Edith Vanderbilt just to the right of center wearing a dark hat, and Cornelia to her left in a white hat. 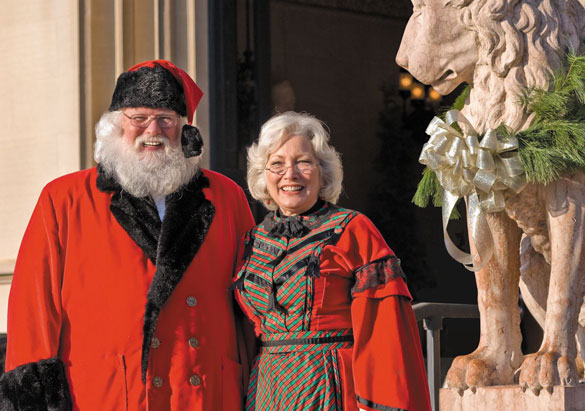 Today, more than a century after the first holiday festivities at Biltmore, we continue to host our annual Christmas party for employees. It is still a grand occasion with gifts for the children, visits with Santa and Mrs. Claus, and delicious refreshments—and a wonderful opportunity to see America’s Largest Home® lit by the glow of candles and firelight during Candlelight Christmas Evenings.

The Banquet Hall tree has been a Biltmore Christmas tradition for 125...