Restoring Our Roots, One American Chestnut Tree at a Time 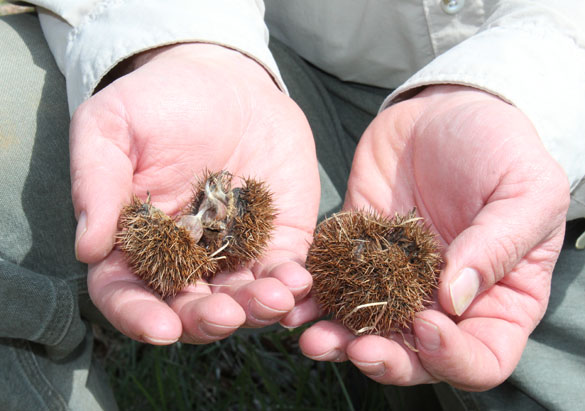 Seeds from one of Biltmore’s hybrid chestnuts encased in a spiny, protective “burr”

History of the American chestnut tree

Known as an all-purpose tree, American chestnuts grew quickly to great size. The wood was strong and resistant to rotting, making it a prized material for foundations, fencing, and railroad ties while the edible nut was an important source of food for cattle, hogs, and wildlife.

Around the turn of the 20th century, a blight (Cryphonectria parasitica) struck the American chestnut tree, effectively destroying the species as a source of food and lumber. The blight doesn’t kill the tree’s underground root system, but once an American chestnut sprouts from an existing stump, it succumbs to blight before it matures into a tree. 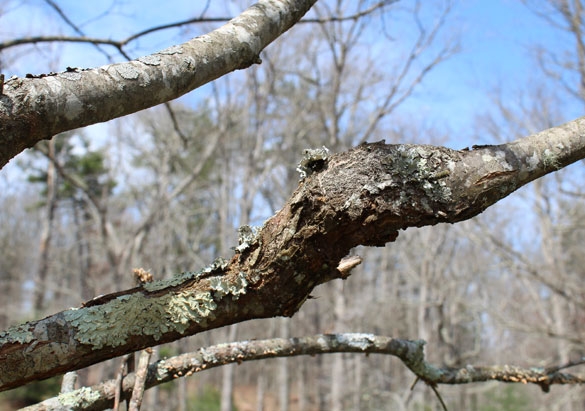 In 1997, Biltmore partnered with the American Chestnut Foundation (AFC) to provide a test site for hybrid chestnuts as part of the AFC’s work to restore this heritage tree. The AFC collected pollen and seeds from the estate and crossed the genetic material with blight-resistant Chinese chestnut trees. The seedlings were planted on a sunny slope near Deerpark Restaurant.

“In a way, we’re restoring our roots,” said Jason Mull, Landscaping Supervisor for many of the outlying historic areas of the estate, including the Approach Road and the chestnut plantings. “This project has a natural tie to the importance Vanderbilt and Olmsted placed on landscaping and managed forestry. 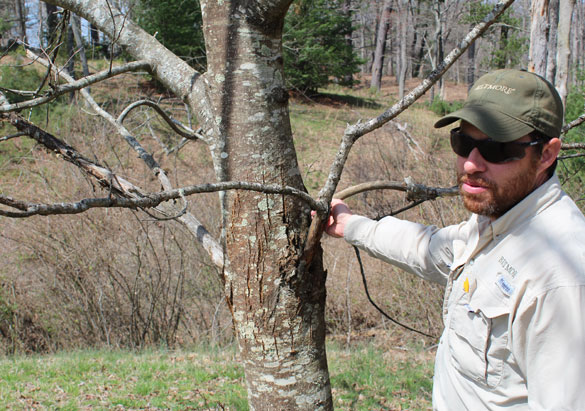 Jason has been involved with the chestnut project since the beginning and has now cared for several generations of trees. The test site includes a mix of American-Chinese hybrids plus full Chinese chestnuts that act as a control group.

“There are only three hybrid chestnuts left from the original planting,” Jason said. “They’ve grown pretty well in the last 20 years. They do show effects from the blight, but it hasn’t killed them.”

According to Jason, some of the more recent plantings carry a much higher percentage of American chestnut DNA than the originals because the hybrids have served their purpose in helping increase resistance to the blight. 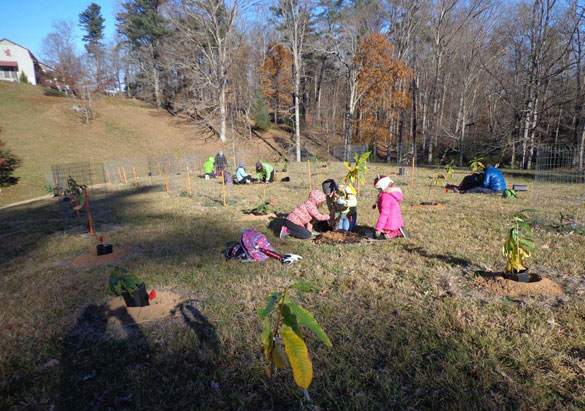 “We’re continuing to work with the AFC to establish another planting site on the estate—preferably in the kind of wooded area that chestnuts tend to prefer,” Jason said. “If our trees continue to do well over time, that’s a wonderful legacy to leave for future generations.”

Featured blog image: Jason Mull and a student from a local charter school plant a hybrid chestnut tree near Deerpark Restaurant in 2013

I loved reading about the Biltmore Estate, but I especially loved reading about saving and restoring the chestnut trees. I’ve purchased chestnuts in grocery stores, eating a few but spending more time holding and just visually savoring them. I hadn’t really – in my mind – connected them to the trees they came from. As an amateur gardener I appreciate the hard work that must have gone into keeping these trees alive. To Jason Mull and his team – Bravo!

Today, Biltmore is home to a variety of Champion Trees—but when George Vanderbilt purchased...