The task list is long in Stacey Weir’s weekly planner this time of year as she and her crew begin preparing Biltmore’s historic gardens for fall.

As Historic Gardens Manager, Stacey and her team must focus on putting the gardens to bed after the long, lush days of summer are done. 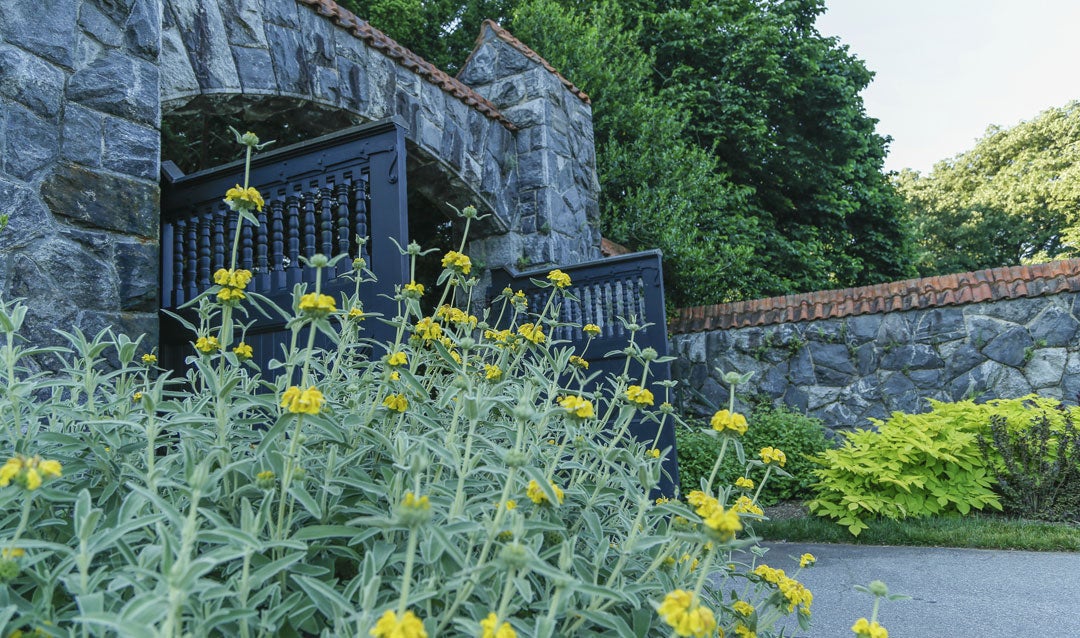 “The landscape has delighted our guests all season with a showy tribute to Frederick Law Olmsted’s original landscape scheme,” said Stacey, “but now it’s time to be preparing Biltmore’s historic gardens for fall.”

The ever-changing gardens require meticulous note-taking and calendar-minding to stay on track for the next season… and the next and the next.

It’s challenging for Stacey to summarize what her team does to get the gardens ready for fall and winter, but she shares some of the main tasks below–and notes that you can follow the Biltmore team’s lead in your own garden at home.

“One of our first tasks for preparing Biltmore’s historic gardens for fall begins just after Labor Day,” Stacey said. “Our crews will be busy pulling all of the tropical plants that have been on display during warmer weather.” 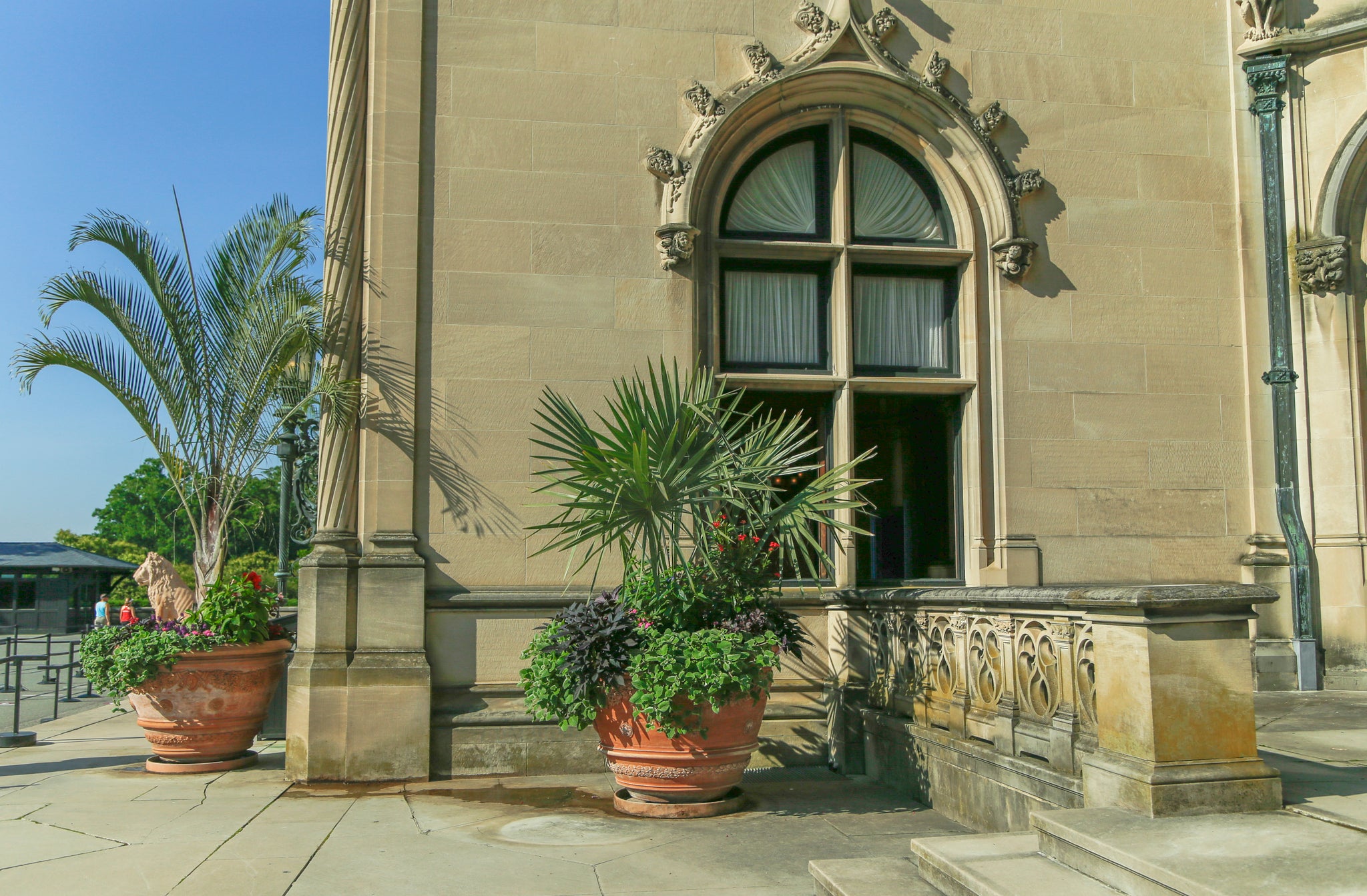 After Labor Day, tropical plants will be returned to the Conservatory

That means the massive terra cotta planters filled with elephant ears that line the front of Biltmore House and other areas are being emptied and stored for next summer.

“Some crew members will suit up in waders to work in the Italian Garden pools where tropical lilies and enormous Victorian lily pads are just finishing their blooming season,” said Stacey. “The crew will weed out the remains and clean the ponds.” 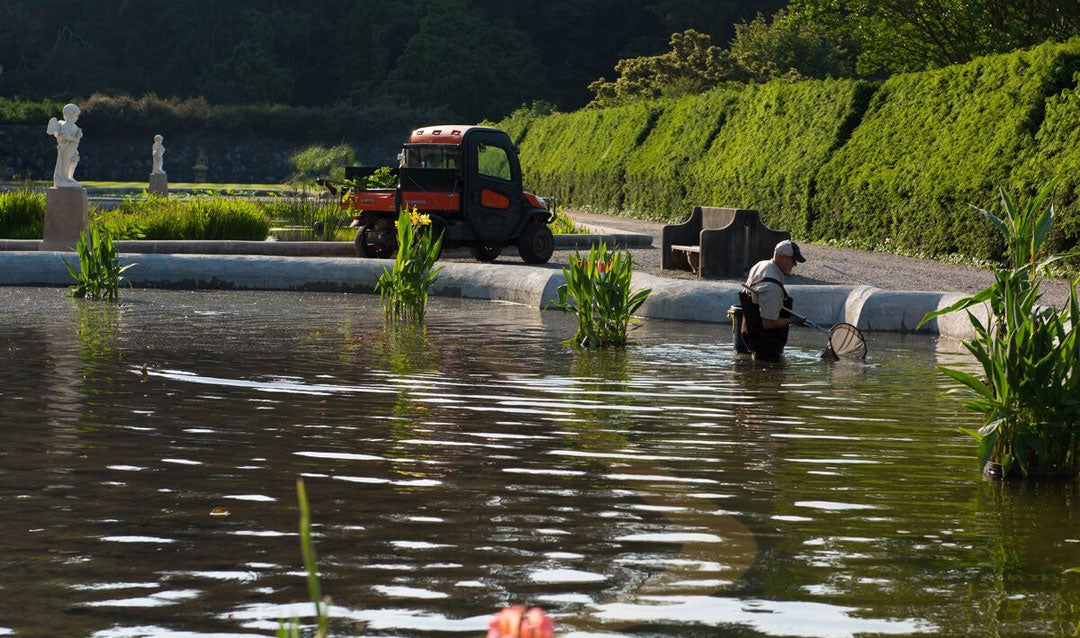 A gardener dons waders to work in the Italian Garden pools

In addition, Stacey notes that height pruning in the floral pattern beds and borders of the Walled Garden is a priority in order to keep leaf drop manageable as the winds pick up with seasonal change. Perennials are cut back to ensure good growth for spring.

“We’ll lift the dahlia bulbs out of the ground in the Walled Garden’s Victorian border to allow the soil to dry naturally,” Stacey said. “The bulbs will be placed in a cool dry place to store over winter to be replanted in the spring.”

Mum’s the word in the Walled Garden 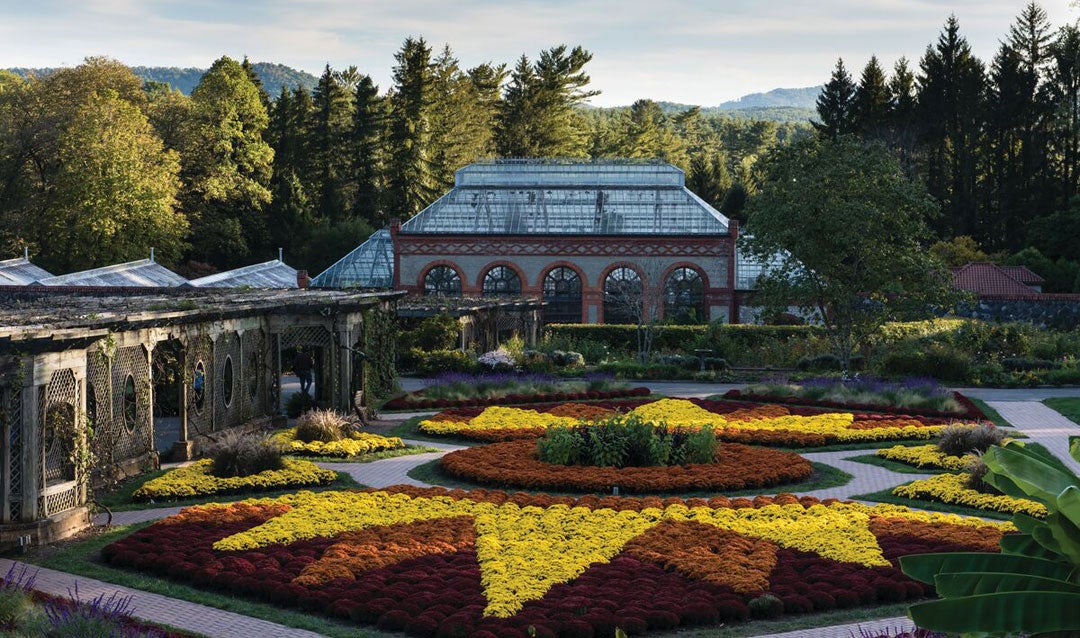 Vibrant mums are a sure sign of fall in the Walled Garden.

The mums will begin showing glorious color in late September and early October, with peak bloom around the second or third week of October.

“We usually plan a warm-toned color scheme for fall, with shades of orange, golden yellow, and deep reds and purples,” noted Stacey. 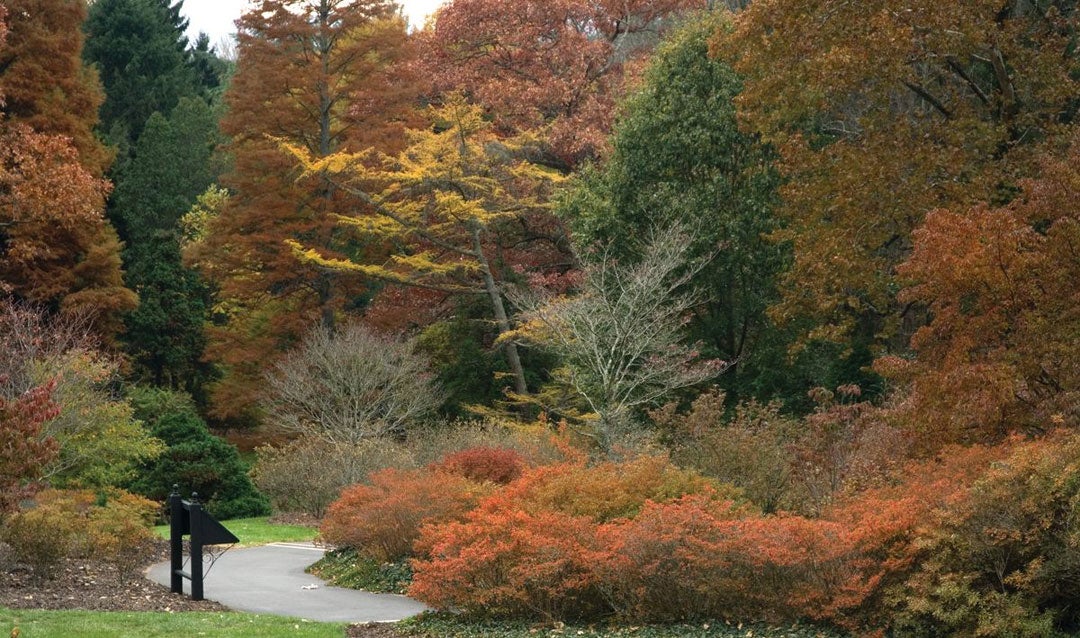 The beautiful fall colors of the Azalea Garden. Credit: The Biltmore Company

As temperatures cool and the leaves begin to change color, just like at your house, there’s leaf management to consider. The horticulture crew embarks on several leaf clean-ups throughout the season to minimize final clean-up at the end of the season.

Crews collect the leaves and use them for compost, or they put the leaves in to a tub grinder with woody debris and grind everything to use for soil.

Any leftovers are used in a compost that made with herbaceous debris, which is broadcast in the field crops and food plots throughout estate property. 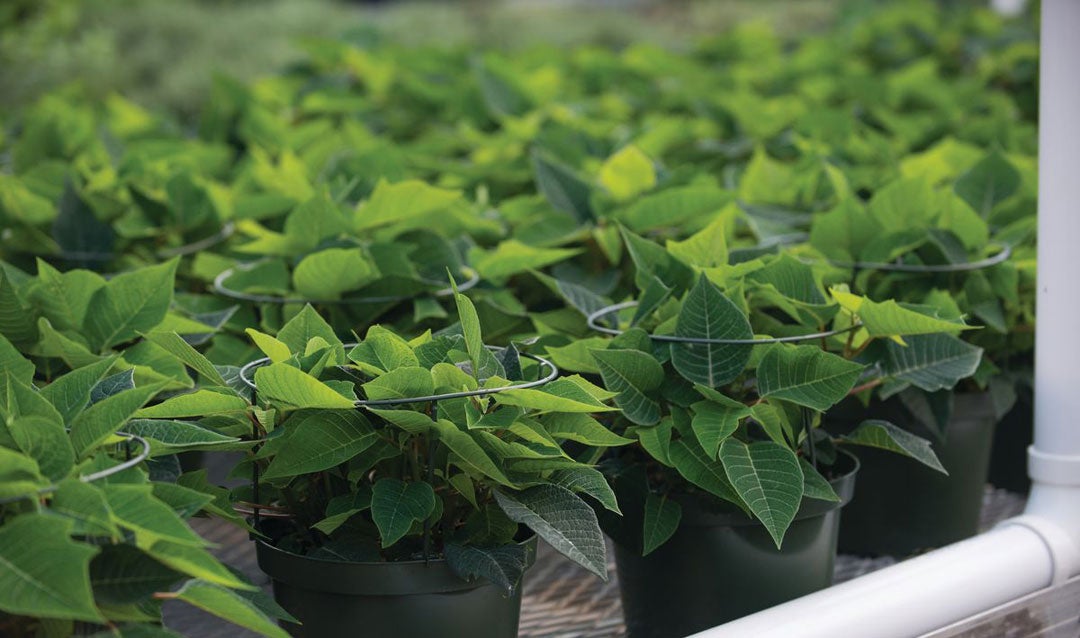 Poinsettias being grown in the production house at the Conservatory

A portion of the poinsettias used during our annual Christmas at Biltmore displays are grown in the production house near the Conservatory.

Planted in July, the poinsettias begin to pop up in early fall. A selection of the full-grown plants will be placed in Biltmore House, while the others will decorate the Conservatory.

In early October, the Conservatory team will also plant tulip bulbs in pots in order to have tulip bloom and color “under glass” by Valentine’s Day in mid-February.

Looking ahead to Biltmore Blooms 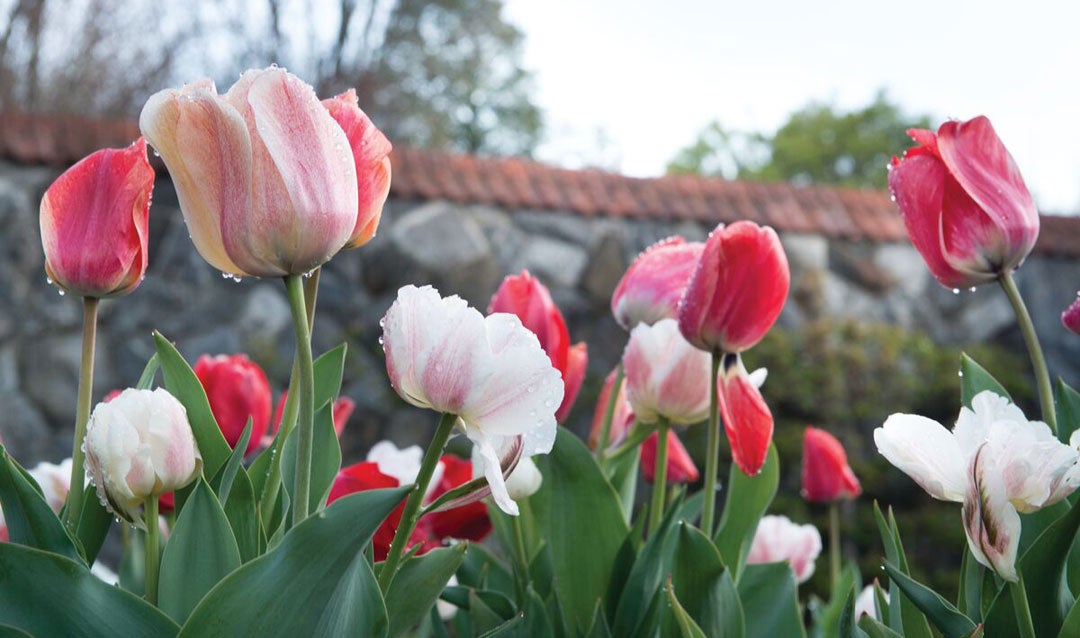 Tulips are a sure sign of spring at Biltmore

And then, there are the tulips which herald the start of our springtime Biltmore Blooms celebration.

To enjoy vivid blooms in April, the bulbs must be planted in November just before Thanksgiving. Actual planting days are based on temperatures to avoid planting when the ground is frozen.

“Each fall, our crews plant thousands upon thousands of bulbs including tulips, daffodils, and hyacinths in the Walled Garden and across the estate. When spring arrives, the total number of blooms is breathtaking!” said Stacey. 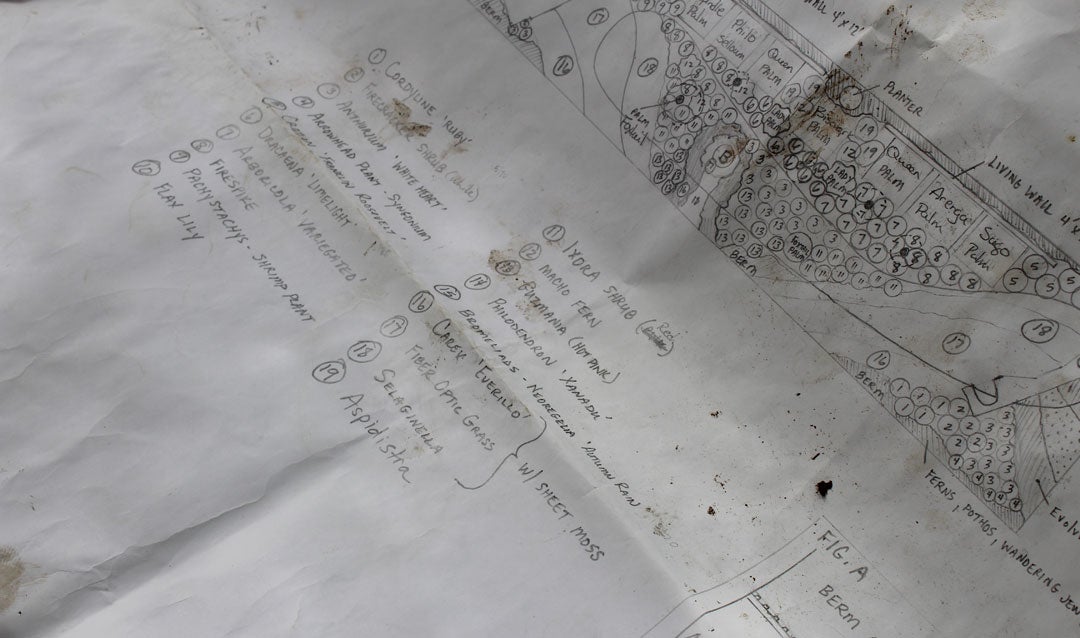 To keep track of every plant–from seed to taking them out of the production house to putting them in the ground–all of these timetables and tasks are organized on paper.

The plans include a “priority matrix” that the gardeners have developed through the years to determine which tasks to focus on first depending on factors such as guest-facing locations and type of plant.

Otherwise, “It’s all a jumbled mess in your head,” Stacey said, She’s quick to add that when you’re working in the gardens season after season, the memory naturally retains the details.

Gardeners are constantly thinking several steps ahead of the task at hand. “In horticulture, everything effects the next thing,” said Stacey. “Perennial-wise you have to make allowances now to have success in the spring. Everything has the continual life span of birth and rebirth almost.” 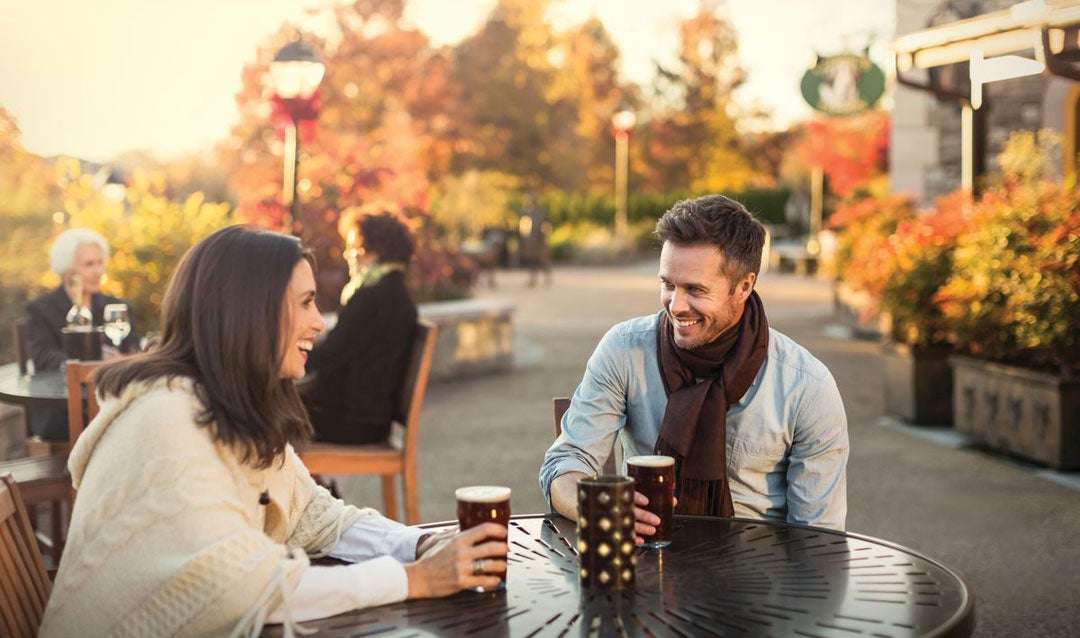 From colorful leaves to crisp days and cool nights, there’s no better time to enjoy a visit to Biltmore than during the fall season. Plan your getaway today.