Experience our annual Biltmore Blooms celebration across the estate as winter loosens its grip to make way for spring!

From the earliest flowering shrubs and vivid blooms in the Walled Garden–including this year’s colorful kaleidoscope of yellow, white, pink, purple, and red tulips in the patterned beds–to the glorious progression of color along the Approach Road, we’ve been delighting guests with our annual Biltmore Blooms celebration for more than three decades. 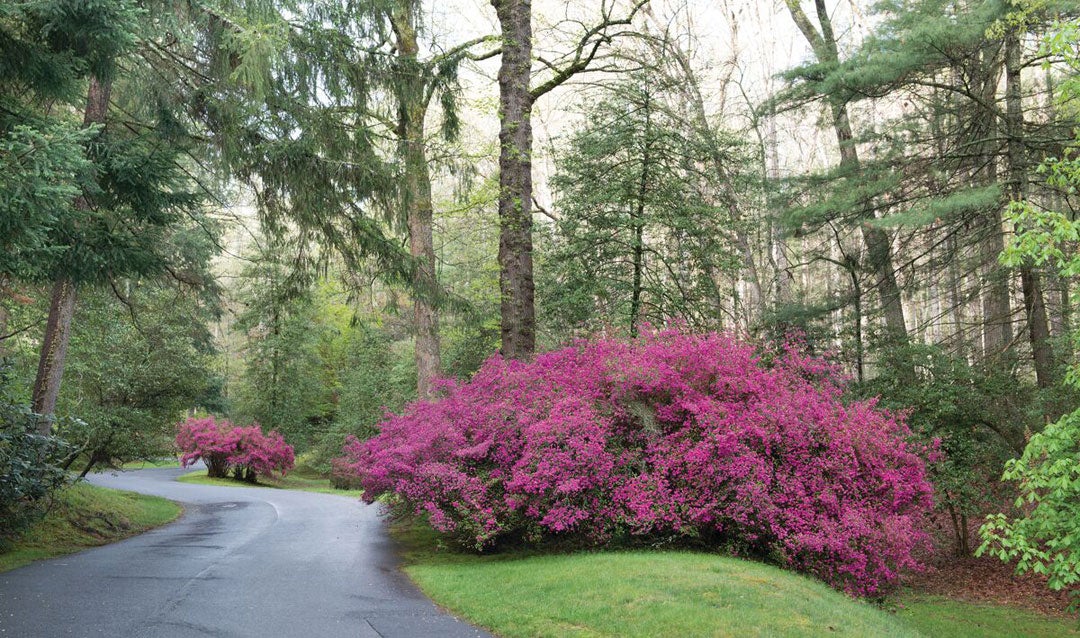 The splendid spring show isn’t limited to the outdoors, however; our Floral and Museum Services teams have worked together to develop an “Art in Bloom” theme featuring beautiful arrangements throughout Biltmore House.

“This year for Biltmore Blooms we are celebrating the fact that George Vanderbilt envisioned Biltmore not just as a home, but also as a platform to showcase the incredible works of art he collected,” said Leslie Klingner, Curator of Interpretation.

“Vanderbilt developed a passion for art early in life,” Leslie said,” and he amassed an impressive collection. To highlight some of these amazing pieces, our floral team has created designs inspired by works throughout Biltmore House.”

“Each year during Biltmore Blooms, our floral designs reflect not only the welcome return of spring, but they also showcase the scale and grandeur of America’s Largest Home®,” said Lizzie Borchers, Floral Displays Manager. 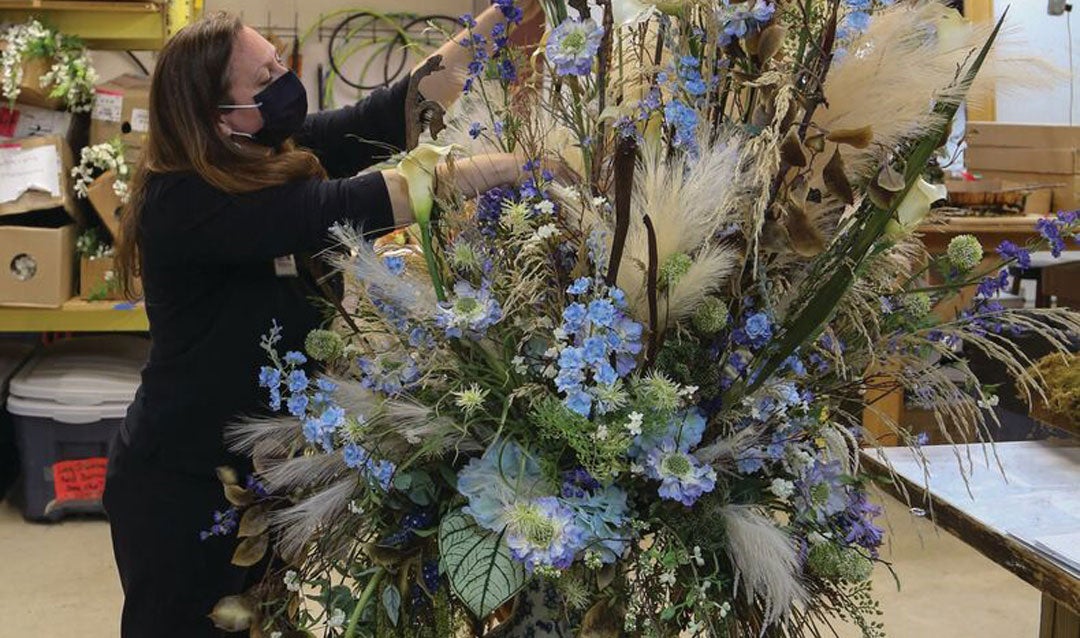 “For ‘Art in Bloom’ in 2021, we envisioned flowers as the paints, pastels, and pencils of spring, turning our arrangements into works of art themselves,” Lizzie said. “When you visit this season, see how our designs highlight the colors, textures, shapes, and forms in the artwork.”

In the Breakfast Room, Biltmore floral designer Lucinda Ledford drew inspiration from two works by Pierre-Auguste Renoir: Young Boy with an Orange, painted in 1881, and The Young Algerian Girl, painted in 1882. 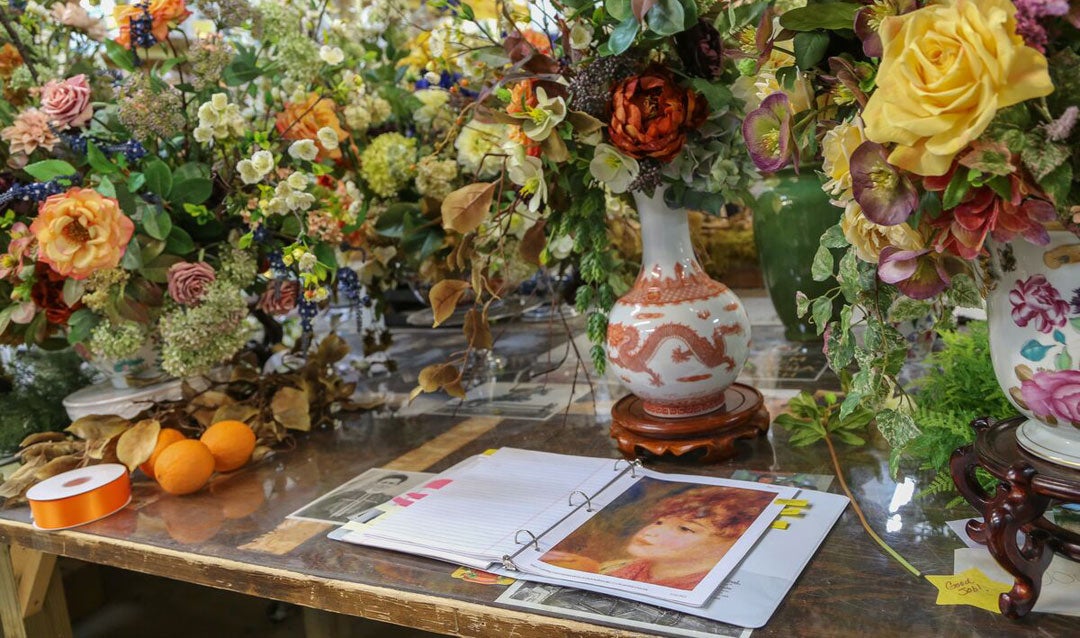 Giovanni Boldini’s lovely 1910 portrait of Edith Vanderbilt that hangs in the Tapestry Gallery near the entrance to the Library inspired floral designer Jodee Mitchell to create a sweeping arrangement featuring delicate white flowers and greenery. 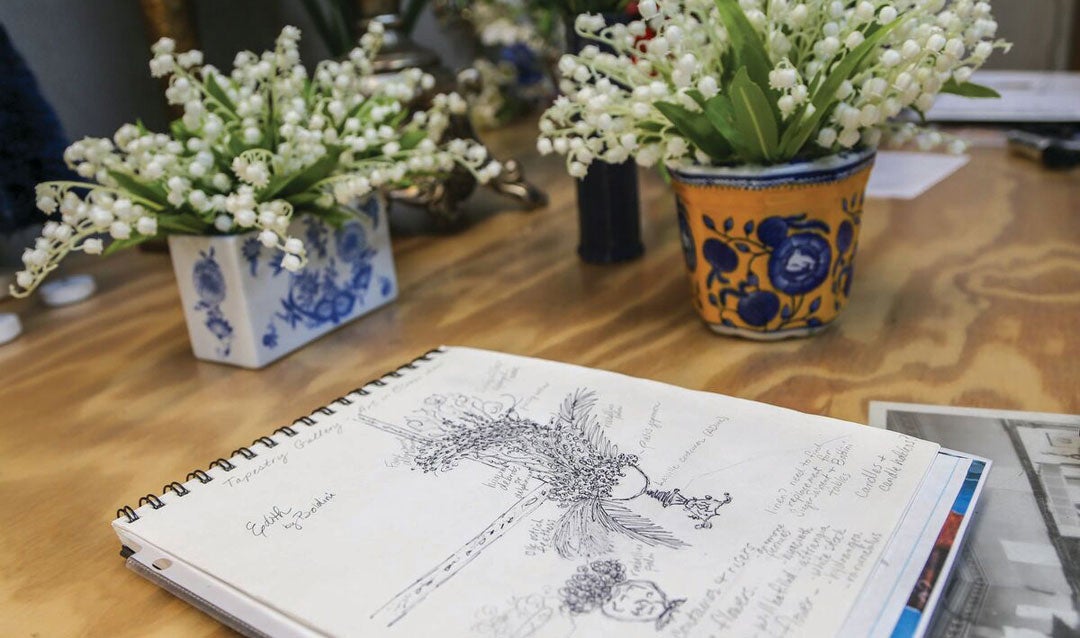 Design sketch for a Biltmore Blooms arrangement featuring lilies of the valley and other white flowers, inspired by Giovanni Boldini’s stunning portrait of Edith Vanderbilt

Based on the series of mid-16th-century Renaissance tapestries detailing the history of Roman mythological gods and goddesses in Biltmore’s Banquet Hall, floral designer Cristy Leonard developed a glorious spring centerpiece befitting the massive table in that room. 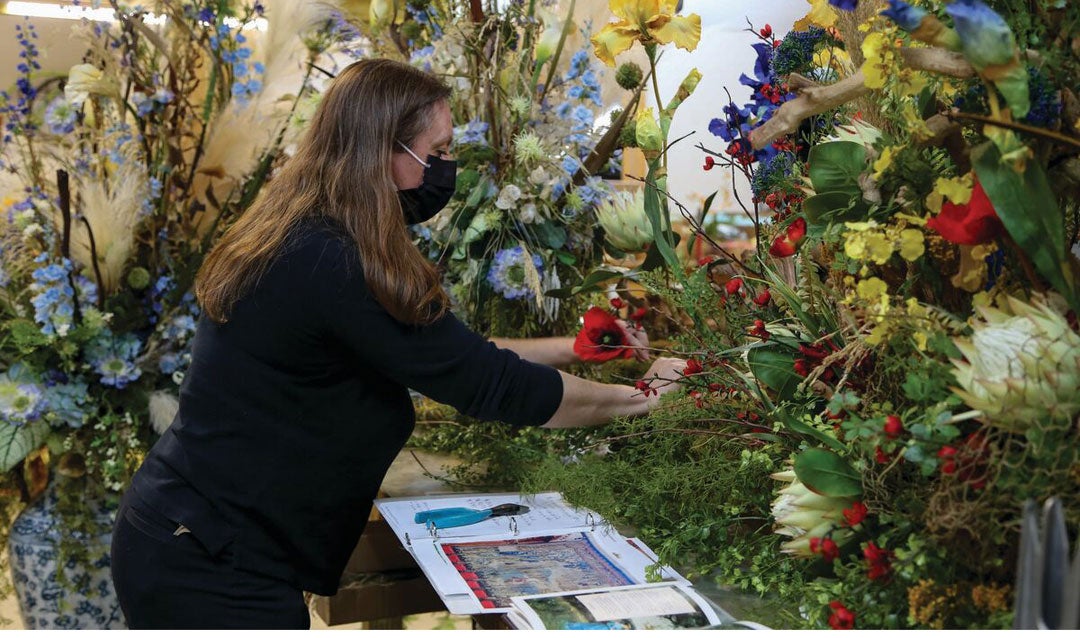 These are just a few of the wonderful arrangements in Biltmore House this spring; there are countless others to discover! 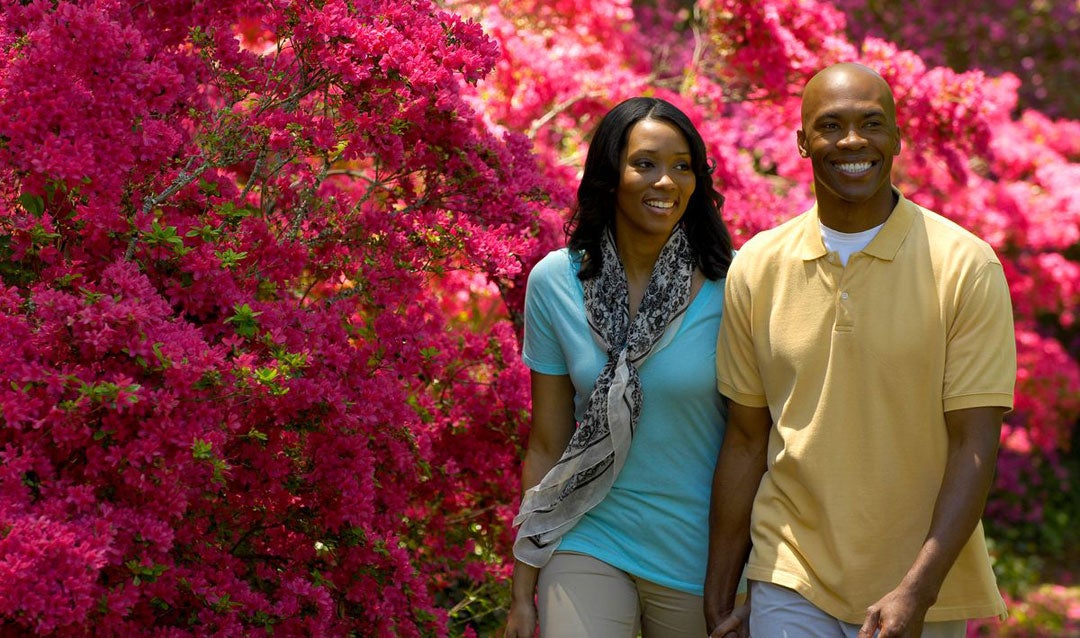 Visit now and enjoy spring across our 8,000 acres!

Experience all the excitement of Biltmore Blooms included with your daytime admission to Biltmore.

Make required Biltmore House reservations now while your preferred dates and times are still available, and experience the spectacular seasonal show in our historic gardens.

In addition to Biltmore Blooms, enjoy the delights of Biltmore Gardens Railway in the Conservatory and Stickwork by Patrick Dougherty in Antler Hill Village, also included in daytime admission.

Twice a year, the Conservatory is transformed into a wonderland of creativity. Discover Biltmore Gardens Railway, featuring miniature estate landmark replicas made of all-natural materials gathered from Biltmore’s grounds. Let’s take an up-close look at the attention to detail paid to the recreations of these historic structures.

About the Lodge Gate Recreation

About the Conservatory Recreation

About the Biltmore House Recreation

The enchantment of Biltmore Gardens Railway is a semi-annual event at Biltmore. Check our event listing for upcoming dates and plan your visit today!

When Todd Roy says there are plenty of reasons to visit Biltmore’s Conservatory in late summer, he’s not exaggerating.

Once you enter the historic structure located at the end of the Walled Garden, it’s like stepping into another world—one filled with lush tropical treasures and venerable vines plus dazzling array of colors, scents, and textures to delight your senses!

Todd is a member of Biltmore’s horticulture team who care for the thousands of exotic and interesting plants that fill the Conservatory. While that much responsibility might seem daunting, he enjoys meeting the needs of his botanical “co-workers,” from hand-watering them every morning to knowing their preferences for light and shade.

“George Vanderbilt chose plants with the same attention and interest as the art he collected,” said Todd. “Some of the specimens he selected are beautiful, some are rare, and some are just odd and interesting.”

It was hard to narrow down the list, but here are 10 of Todd’s top picks to see during your next Conservatory visit:

The Conservatory has an impressive collection of Cycads with a few dating back more than a century to the time of the Vanderbilts. Cycads only grow about one inch per year, so the size some of these have achieved is especially impressive. 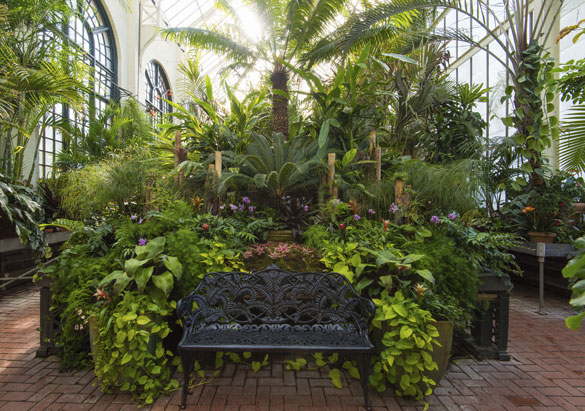 Between the bench and the palm towering overhead, a lush Cycad makes a photo-worthy backdrop

Just inside the Cool House, look for a grouping of Thai Giant Elephant Ears (Colocasia gigantea) featuring some of the largest leaves in the Conservatory. 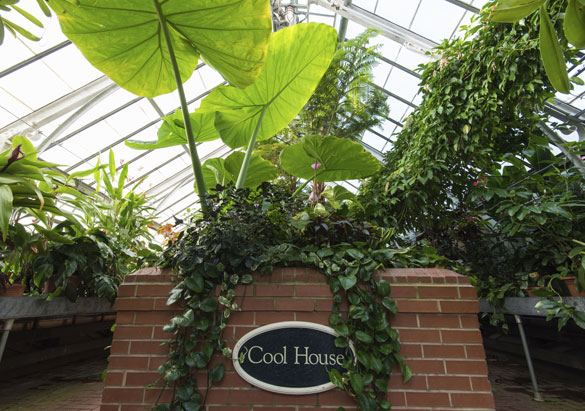 Each year, Todd creates special themes for the two alleys located between the main wings of the Conservatory. This year, they’re showcasing useful/edible plants in one alley and water features in the other.

Have you ever wondered how coffee, cotton, or allspice (Pimenta dioicaa) grows? You’ll find examples of each along with black pepper vine, Miracle Fruit (Synsepalum dulcificum) that makes sour foods taste sweet, Barbados cherry (Malpighia emarginata), an important source of Vitamin C, and many more. 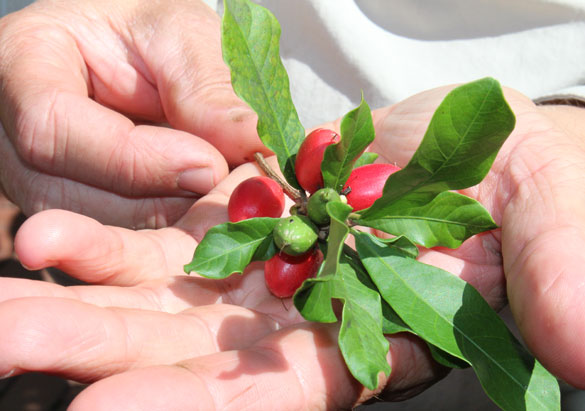 Once you’ve admired all the edible plants, take a stroll down the opposite alley to experience the soothing sounds of water trickling and splashing over pebbles into small pools surrounded by lush container plantings. Linger here to watch the play of light on water and absorb the peaceful atmosphere of this relaxing space tucked away and just waiting to be discovered! 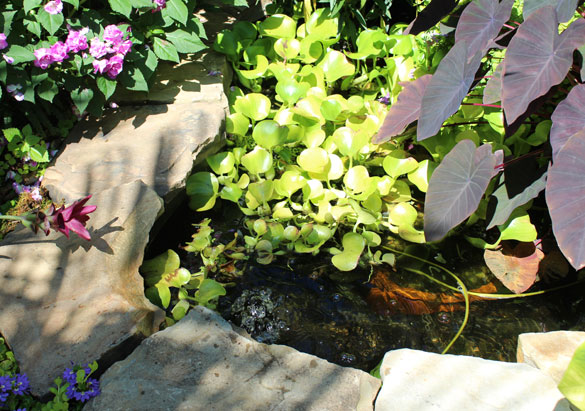 According to Todd, the Red Button Ginger (Costus woodsonii) growing near the end of the Cool House is a hummingbird magnet. “When it flowers in late summer, each ginger cone produces a single red bloom,” said Todd, “and the hummingbirds know it’s there, almost as if they’ve mapped out the Conservatory. I see them early in the morning, visiting each flower, then flying away before it gets too warm inside.” 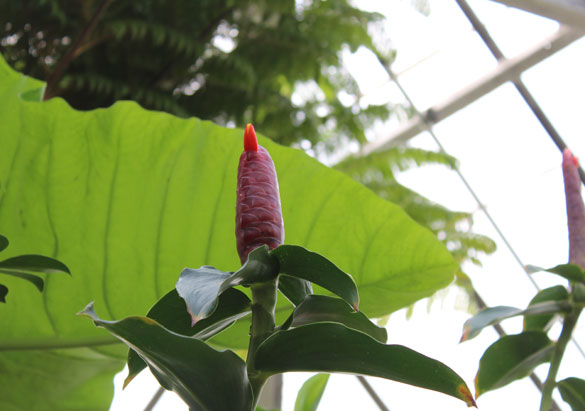 Want to visit the tropics without leaving Biltmore? Don’t miss the fragrant display of Plumeria in containers along the back wall behind the Conservatory. Also commonly known as Frangipani, Plumeria is native to many of the world’s tropical regions and the beautiful blooms are often used in Hawaiian leis. 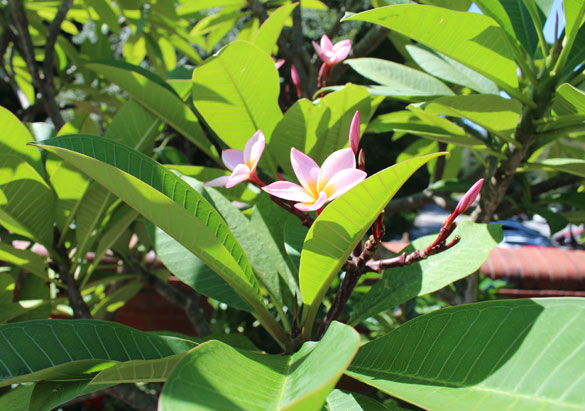 Pretty pink Plumeria flowers smell as lovely as they look

If you’re a fan of Coco Chanel’s iconic Chanel No. 5 perfume, your nose may lead you to a very special specimen growing in Biltmore’s Conservatory. The Ylang Ylang Tree (Cananga odorata) produces creamy yellow flowers with long petals, and their heady floral scent is the signature note associated with the world-famous fragrance. 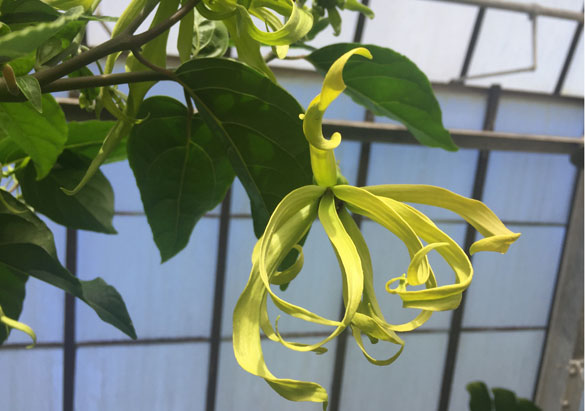 A fragrant yellow bloom of the Ylang Ylang Tree

The area of the Conservatory dedicated to members of the cactus clan definitely keeps some secrets from our day guests!

“It’s actually very hard to catch a night-blooming cactus at its peak,” Todd tells us. “You have to be here late at night or very early in the morning to see the full potential of the flowers.” Lucky for us, Todd has captured some elusive blooms from the Cereus family like this stunning Queen of the Night (Epiphyllum oxypetalum) example. 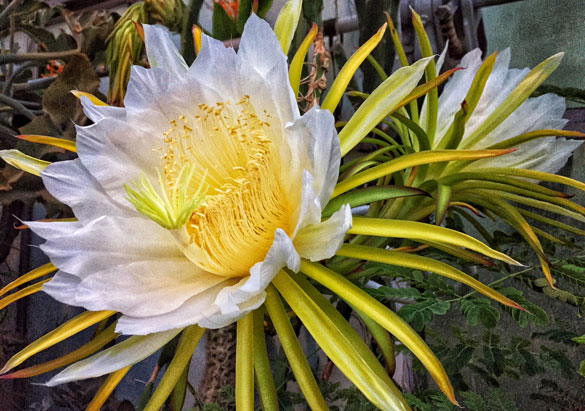 ‘Queen of the Night’ cactus in bloom

While the idea of carniverous plants may seem like an oxymoron, Slender Pitcher Plants (Nepenthes gracilis) and other varieties offer a fascinating glimpse into a highly-specialized world in which plants attract and trap insects as their main source of food. The year-round warmth of the Conservatory provides a perfect environment for both the pitchers and the insects on which they feed. 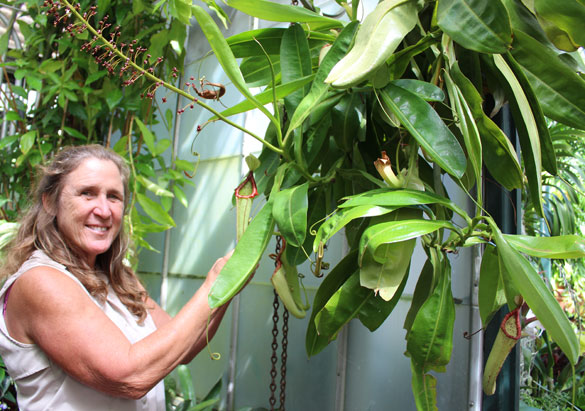 No visit to the Conservatory is complete without marveling at the glorious glass sculptures by artist Dale Chihuly during Chihuly at Biltmore and Chihuly Nights at Biltmore. As you approach the Conservatory, note the Cattails and Copper Birch Reeds installed in the Butterfly Garden. 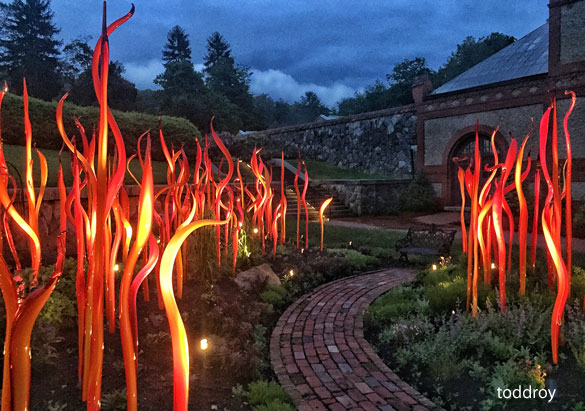 Inside the structure, look up to the ceiling to spot three intricate Burnished Amber, Citron, and Teal Chandeliers; you’ll find them at the far left, far right, and in the center of the main room. Their time is limited, however, as these breathtaking “blooms” are only here until October 7. 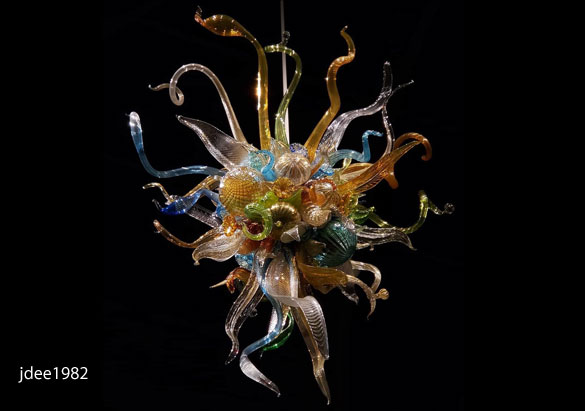 One of Chihuly’s three Burnished Amber, Citron, and Teal Chandeliers inside the Conservatory at Biltmore