After almost two years of planning, Biltmore’s newest costume exhibition, Glamour on Board: Fashion from Titanic the Movie, is beginning to come to life.

While key costumes from the film have been shown in other places, this is the first large-scale display—including outfits of background characters, shoes, accessories, and more.

All that’s to say, Leslie Klingner, Biltmore’s Curator of Interpretation; Anne Battram, our Upholstery and Textile Conservator; and Janey Abbott, Costume Specialist, have been hard at work. Anne and Janey began dressing mannequins back in May and they’ll be the first to admit: There’s more to the task than meets the eye. 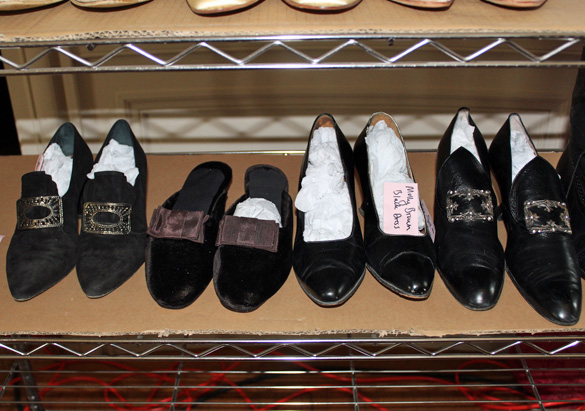 Before the costumes were chosen at Fox Studios, Leslie worked with other members of our Museum Services team to map out the storyline of the exhibition, which informs where the costumes will be placed throughout Biltmore House.

“This plan shifted a bit as we saw what costumes were available,” said Leslie. “Some were so striking that it was clear immediately in what room they could best be showcased.”

As Titanic is set in the early 1910s, many of the period-specific costumes paired easily with the interior of America’s Largest Home®—but others required some judgement calls. 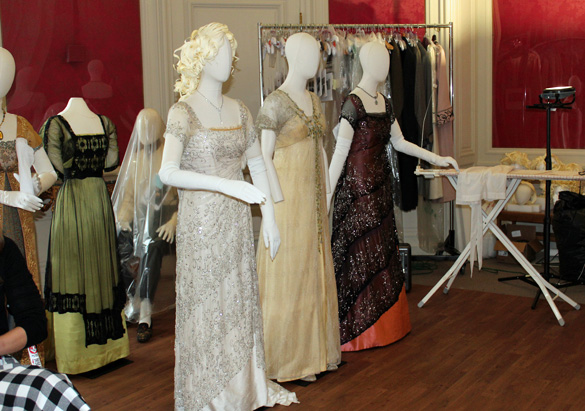 For instance, one costume in the film’s collection is a beautifully intricate maritime officer’s uniform.

“The artistry of the piece is truly incredible,” Leslie said, “and the Captain’s story is an important one, but that outfit simply doesn’t make sense just anywhere in Biltmore House. In the end, we decided that it made the most sense in the Banquet Hall, knowing that when the Vanderbilts’ travelled, they would have often been invited to dine at the Captain’s table. We wanted to convey a sense of that through this exhibition.” 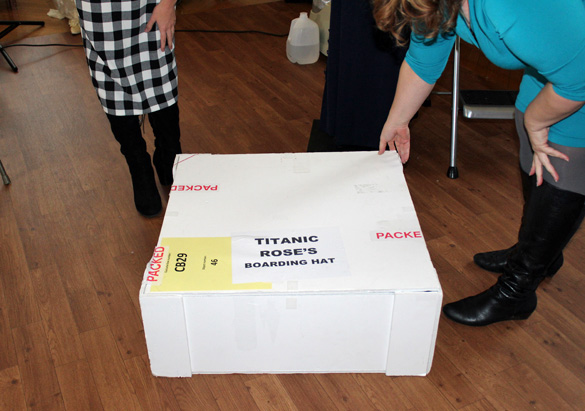 Not long after the flow of the exhibition is outlined, the costumes begin to arrive. At this point, Leslie and Janey must photograph each of the 511 items to document their condition and arrangement upon arrival.

“The process is far more involved than dressing a retail mannequin,” explains Leslie. “These costumes are iconic and hold cultural and historical value, so we have to pay attention to the details of every single piece.”

The team then creates an inventory sheet for each costume, identifying all of the pieces included as well as a film still showing the costume on its character. 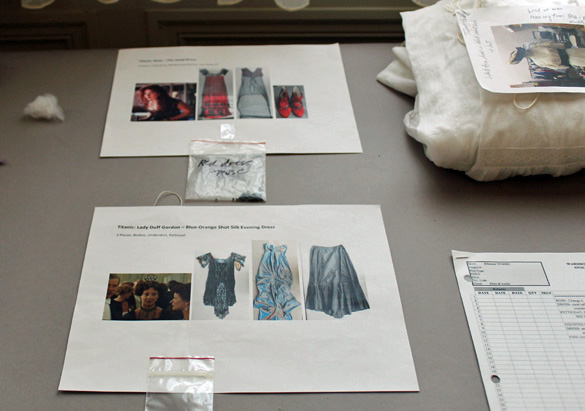 Before actually dressing the mannequins, Leslie and Anne pair the costumes with the most appropriate mannequin.

“Our mannequins are custom made,” explained Leslie, “and as styles change with the times, it’s important for each to reflect the style of dress from that era. We pad out mannequins to best support the textiles while they are on display and also try to reflect the form of the actor who originally wore the outfit.”

“For some costumes, we need mannequins whose poses can accentuate certain accessories, such as shoes or a fan, while still appearing anatomically correct,” added Janey. 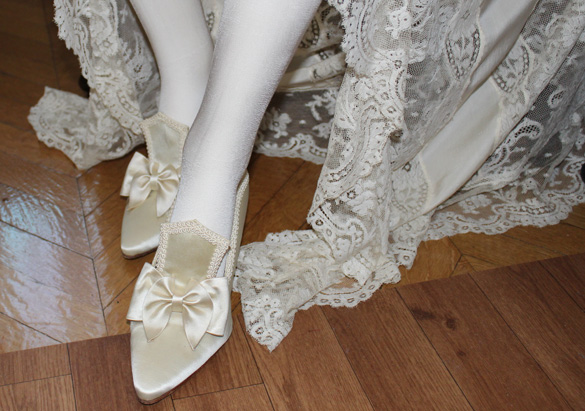 Finally, Anne and Janey put the costumes on the mannequins and Leslie checks to see what may need adjusting to make the pieces as authentic as possible—which can be anything from needing extra padding to create a certain shape to finding creative ways to resolve issues that arise.

They then take the costume off, make the adjustments, put the costume back on, and check their work.

“No matter how well we plan, there is always something that didn’t fit quite how we expected,” said Leslie. “Anne and Janey have come up with countless ways to mask small gaps between buttons or to create the illusion of a lengthened hem. It’s an art!” 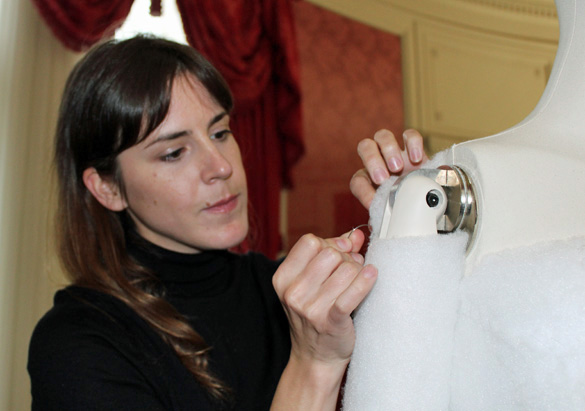 “It really is a challenge in 3D thinking,” says Janey. “We’re essentially creating form from the inside out.”

In the last few months of dressing, this team will be adding wigs custom-made of watercolor paper and jewelry for a final touch. Meanwhile, our Floral team is planning complementary décor for the rooms and our Engineering and Conservation teams plan for lighting, object movement, and installation.

Join us for the exhibition and see how all of the hard work pays off. Also, be sure to ask about our limited-time Glamour on Board Premium Guided Tour. In this 90-minute tour, you’ll learn captivating stories behind the costumes’ creation, and get fascinating insights into the elegance of the era’s fashions, culture of the times, costume design, and making of the film.

Of course, a visit to Biltmore House is at the very top of our list, but what should you do after spending a few hours touring America’s Largest Home®? Our autumn itinerary below offers suggestions for how to make the most of a day and a half at Biltmore.

South Terrace (.5 hours)
Take your time on the four-acre terrace next to Biltmore House and enjoy a sweeping scene of the surrounding mountains that truly seem to go on forever. Fun fact: George Vanderbilt once owned all of the land he could see from this terrace—even Mt. Pisgah more than 30 miles away!

Rooftop Tour (1 hour)
Build your architectural knowledge of Biltmore House while taking in picture-perfect long-range fall views from its rooftop and balconies on this behind-the-scenes guided tour.

Walled Garden (1 hour)
Next, head to the Walled Garden, transformed by a carpet of vivid chrysanthemums. This year’s color show features brilliant blooms in red, purple, orange, and yellow.

Taste of Biltmore Culinary Showcases (3 hours)
Relish harvest flavors as you mingle with estate chefs, local purveyors, and artisans who share their expertise in crafting distinctive fare from fresh estate-raised and local ingredients.

Wine & Cheese Hour (1 hour)
End the day with a social hour hosted by our most knowledgeable wine aficionados and savor delicious pairings of Biltmore wines and a variety of artisan cheeses.

Biking (1.5 hours)
Wake up the next morning with a bike ride across the estate and discover our woodland trails enveloped in fall color. Bring your own bike or rent one from us!

West Side Segway Tour (2 hours)
Travel by Segway across the French Broad River to the estate’s west side and enjoy beautiful views of our pastures and vineyard while learning about Biltmore’s agricultural program.

So you see, a day and a half is plenty of time to experience our most colorful time of the year.

If April showers bring May flowers, what do April engagements bring? For George Vanderbilt, April 1898 brought his engagement to Edith Stuyvesant Dresser. That, in turn, brought about two wedding ceremonies: the first being the couple’s civil service on June 1, performed by the mayor of Paris at the Town Hall of the Eighth District in the Rue Anjou.

At noon the next day, George and Edith were wed in a religious ceremony at the American Church of the Holy Trinity. Afterwards, the newlyweds, along with family and friends, returned to Edith’s apartment on Rue Vernet for a reception that included two bottles of champagne set aside for the occasion 24 years earlier–at Edith’s birth–by her maternal grandfather.

Following an extended honeymoon in Europe, the couple took up residence at Biltmore House, beginning their legacy of gracious hospitality that continues to delight our guests today.

In honor of the Vanderbilts and their descendants, The Biltmore Legacy in Antler Hill Village is currently hosting the Fashionable Romance Exhibition which features all the beautiful details and descriptions of 60 years of family weddings. You’ll discover stories of “Cupid’s richest captive” as the newspapers of the day dubbed George Vanderbilt and his marriage to Edith Dresser–a “very charming and accomplished girl.”

Other exhibition highlights include the stunning re-creation of the gown Cornelia Vanderbilt wore for her 1924 marriage to the Honorable John Cecil, and the glamorous 1950s wedding dress and exquisite Lee family veil worn by Mary Lee Ryan when she married George Vanderbilt’s grandson William Cecil. The heirloom veil was also worn by Mary Ryan’s first cousin Jacqueline Bouvier when she married future President John F. Kennedy in 1953.

Planning your own group event or fairytale wedding? The gardens and grounds of America’s Largest Home® can provide the perfect setting for your special day!